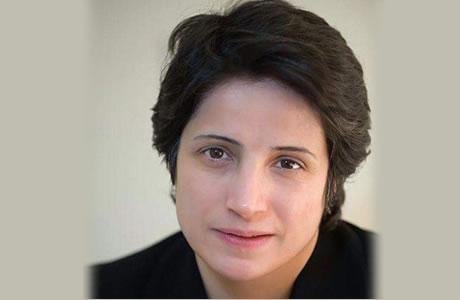 Nassrin Sotoudeh, lawyer of human rights defendants, was rearrested. Ms. Sotoudeh was arrested at home in Tehran on Wednesday, June 13, 2018, and transferred to the Prosecutor’s court of Evin. There is no information available on the reason for detention of Nassrin Sotoudeh.

This is not the first time Nassrin Sotoudeh, a jurist and lawyer and winner of the Human Rights International (HRI) Award, is arrested.

Nassrin Sotoudeh was imprisoned for defending a number of activists arrested in the 2009 uprising. Before being arrested, she had been repeatedly threatened for the cases she chose to defend.

Sotoudeh was arrested for the first time on September 4, 2010. Her initial sentence was 11 years in jail followed by 20 years of being forbidden from practicing law and from leaving the country. The Revision Court, however, commuted her sentence to six years in jail and halved the years when she cannot practice law or leave the country.

Nassrin Sotoudeh, lawyer of human rights defendants, repeatedly went on hunger strike during her three years in jail in protest to illegal measures and violations of her own and other prisoners’ human rights.

The first time, she went on hunger strike from September 25 until November 15, 2010, nine days of which was a dry hunger strike.

Her second hunger strike lasted from December 7 to December 20, 2010. She did not even drink water during these 13 days.

On October 17, 2012, she went on hunger strike for the third time to protest the government’s ban on her 12-year-old daughter’s travel abroad. She ended her hunger strike after 49 days on December 4, 2012, after the Iranian regime withdrew the travel ban.

Ultimately, Nassrin Sotoudeh was released from prison on September 18, 2013, after serving two-thirds of her sentence.

In November 2013, she staged a sit-in protest outside the building of the Lawyers’ League in Tehran, protesting three-year ban on her practice of law. With the support of other lawyers, she managed to have her license renewed.

Nassrin Sotoudeh, lawyer of human rights defendants, has received a number of international awards including the 2016 Women Have Wings Award, the 2008 Human Rights International (HRI) Award, the 2012 Sakharov Prize for Freedom of Thought, and the 2011 Pen Club Award