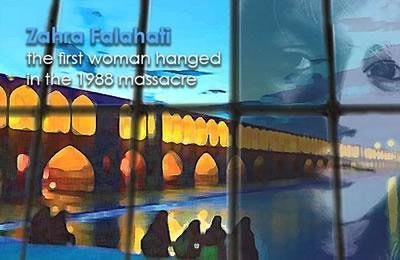 Zahra Falahati was raised in a family in Isfahan, so she had an Isfahani accent.

Her family was very traditional; a girl should not leave home and should not study.

Her father didn’t let her go to school but with the help of her mother and without the father noticing it, she studied.

Her father bought her a weaving machine to keep her totally confined at home but Zahra never surrendered. In short intervals that she got out without him noticing it, she was able to form a resistance cell with some other girls. This small group gave her strength to resist even more against the reactionary culture surrounding her.

When her father found out, he locked her at home.  She ran away to her relatives, to be able to continue her activities until she was arrested in 1981 by the clerical regime’s Revolutionary Guards.

Zahra Falahati was a symbol of honesty and integrity, and a symbol of serenity, love and kindness towards others. When I met her at the punishment ward 8 of Ghezel-Hesar Prison, I trusted her so much to seek her advice on every issue.

She was a liberated and, at the same time, experienced young woman who deeply understood that the sole enemy of all Iranians were the mullahs.

She nursed all tortured women, all the small children there and shared the sorrow of all the mourning mothers and wives. She helped all those with financial problems.

We were not allowed to remain awake after lights went off but for some nights I had noticed that she wasn’t in her bed in the middle of the night. One night, I got worried and followed her. I saw her sitting on the top of a three-tier bed sewing something. I couldn’t control myself anymore and asked her, “What is this? Is it so important that you are putting yourself at risk for several nights to sew it?”

“Go to sleep,” she said instead of any answer.

A few days later, I found a dress among my stuff. This was the same dress she was sewing for several nights. I asked her the reason and she replied, “I noticed that you need it, so I had to do it.” She had torn her own new dress to make two dresses for me and another inmate who also needed one.

Zahra was released in 1985. Bidding her farewell was tough. I teased her, “I’m not happy at all that you are free.” She said, “Don’t worry, we will soon see each other, again.”

It was 1987 and I was in Gohardasht Prison when I found out that Zahra and Soheila Mokhtarzadeh had joined the Resistance in Iraq. They had kept in touch with their families and gave the news of women in the movement to be passed on to prisoners.

One day I heard that they had been both arrested in the border region. Not long after being detained, Sohaila got killed under torture but Zahra was taken to the Evin Prison.

In winter 1988, I was transferred to the public ward of Evin and saw her again; she was stronger, more resilient, and more experienced, though her body was scarred and bruised all over due to vicious tortures and wounds inflicted on her at the time of arrest.

Every day, she spent hours to tell us about women’s resistance and teach us new anthems.

She had not been sentenced; this had been conditioned on her cooperation and on kneeling to the misogynous mullahs. The enemy didn’t know that Zahra had said “no” to them since she was 8 or 9 years old.

Soon, the New Year arrived and we had no sweets to celebrate with, and she offered us cube sugars saying, “to the aversion of the mullahs we will celebrate with these.”

When she heard good news about achievements made by women freedom fighters of the Resistance, she made a cake with the little stuff we had in our ward to celebrate. The cake was in the shape of a pigeon. But the revolutionary guards found out and raided the ward to stop our celebration.

Zahra always told us that the regime would never free us but will “purge” us, i.e. kill us all. She asked, “How could the regime release so many resilient and passionate women?”

It was July 27, 1988. We were sitting in a room together. I was holding her hands and talking to her. All of a sudden they called her name.

The announcement echoed three times. My hands froze in hers.

She tried to pull back her hands; I resisted.

I couldn’t stop crying and I couldn’t let go of her hands. All other inmates came to the room, anxious because they knew the calls were not for interrogation.

Zahra, however, was patient and calm. One helped her put on her clothes, the other brought her chador; everybody whispered something into her ear. I came back and held her arm.

I was dragged away and Zahra walked towards the door. I called her several times as she was passing through; she looked back at me. Her eyes urged me to be patient, everything will be all right.  She was smiling at us all, and her eyes gazed out at the horizon.

No matter how hard I tried to make her look at me again, I was not successful, as if she was already in another world.

Then the loudspeakers blurred more names none of whom had received any sentences, yet: Homa Radmanesh, Soheila Rahimi, Maliheh Aghvami, …

This was enough for us to understand that they were all going to be executed.

I went back to the room. Having lost my control, I hammered my fists on the ground and cried out, “I want Zahra! I won’t let them take her from me!”

Other inmates hushed me, putting their hands in front of my mouth, cleaning my tears.

It was so strange. Many had been taken away from my side to the gallows and every time, I was able to prevent my tears from running down. But I didn’t understand why I had lost patience for Zahra and couldn’t bear losing her.

I vowed to follow in the footsteps of Zahra as I fight on along with the noble women of my homeland to topple the misogynous and reactionary mullahs.