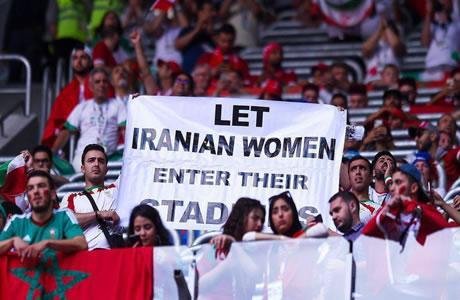 Elimination of images of women led to widespread outrage in Iran

Elimination of images of women, and especially Iranian women not covering their hair, from the state media reports and publicities on the participation of the Iranian national football team in the World Cup in Russia made headlines in Iran.

On the sidelines of the game between national football teams of Iran and Morocco, the Iranian state-run television prepared a report from Russia in which they only broadcast the images of women who had covered their hair. None of the Iranian women who were not wearing a scarf were shown in the report.

A number of these women protested the regime’s news censorship and the elimination of images of women who did not cover their hair.

At the same time, supporters of the Moroccan team in the stadium held up a placard which read, “Let Iranian women enter their stadiums.”

Earlier, the Revolutionary Guard Corps (IRGC) had installed a billboard in downtown Tehran on the Iranian national football team’s participation in the World Cup games in Russia which outraged the general public.

The billboard depicting only men of various Iranian nationalities led to extensive outrage against elimination of images of women from the picture. The IRGC had to back down and later changed the billboard.

The Iranian regime has so far arrested dozens of women for their attempts to enter sports stadiums in Iran. The regime does not officially allow women in sports stadiums but women have strongly opposed this decision. In recent months, a number of young women wore men’s make-up and managed to walk in the stadiums and watch the game. They posted video clips of themselves from inside the stadium on the internet to international enthusiasm and support.

In November, one of the regime’s top clerics, Nasser Makarem Shirazi said women’s entry into sports stadiums is “a deviation.

“The issue was tabled by the previous government but the Supreme Leader and other religious authorities opposed it. Unfortunately, however, some people are seeking to pass a bill despite having knowledge (of such opposition),” stated Mullah Makarem Shirazi and added, “It is a deviation to bring up this issue, again.” (The state-run ISNA news agency – November 29, 2017)