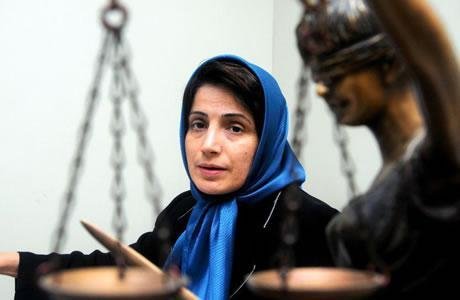 Nasrin Sotoudeh arrested for defending protesters to mandatory veil. In a short telephone call on June 16, 2018, from Evin Prison, this prominent human rights lawyer said she had been arrested in connection to the dossier of Shaparak Shajarizadeh and detained in the general ward of Evin Prison.

Nasrin Sotoudeh had previously undertaken the defense of several women who protested the compulsory veil, and was apparently arrested for defending protesters to mandatory veil.

The Women’s Committee of the National Council of Resistance of Iran issued a statement condemning the arrest of lawyer and human rights activist Nasrin Sotoudeh and called for her immediate and unconditional release from prison. The NCRI Women’s Committee urged all human rights and women’s rights organizations to take urgent action in this regard.

Amnesty International issued an urgent action, describing the arrest of Nasrin Sotoudeh as “an outrageous attack on a brave and prolific human rights defender.” AI pointed out that Ms. Sotoudeh had undertaken the defense of a number of women protesters against the compulsory veil in recent months.

The U.S. State Department also expressed deep concern over the re-arrest of Nasrin Sotoudeh on Thursday, June 14, 2018. The State Department’s spokeswoman said, “We are deeply concerned by reports that Iranian human rights lawyer Nasrin Sotoudeh has been arrested again. Ms. Sotoudeh was reportedly arrested today at her home and taken to Evin Prison, the notorious prison the U.S. Department of Treasury designated last month in connection with its involvement in the Government of Iran’s human rights abuses. Ms. Sotoudeh most recently represented women unjustly detained for protesting Iran’s mandatory hijab law.”

The U.S. State Department said in its statement, “We applaud Ms. Sotoudeh’s bravery and her fight for the long-suffering victims of the regime. We call on Iranian authorities to release her immediately, along with the hundreds of others who are currently imprisoned simply for expressing their views and desires for a better life.

Zeinab Jalalian is being subjected to torture – Amnesty International