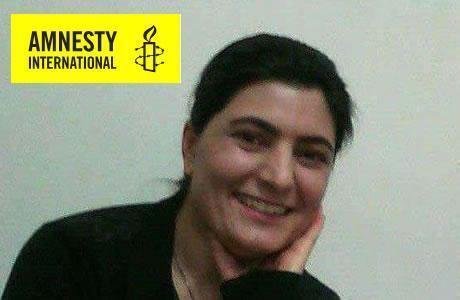 Zeinab Jalalian is being subjected to torture – Amnesty International

Zeinab Jalalian is being subjected to torture by blocking her access to medical care, said Amnesty International in a call for urgent action on June 15, 2018.

Kurdish political prisoner Zeinab Jalalian is critically ill and needs urgent medical treatment. She has been suffering from a dental infection for the past three months, but the Khoy Prison authorities have refused to allow her to see a dentist.

AI wrote in its statement, “Iranian Kurdish woman Zeinab Jalalian is being subjected to torture by the Iranian authorities, who are deliberately blocking her access to specialized medical care, despite her deteriorating health in Khoy prison, West Azerbaijan Province. She has several medical conditions, including a heart problem and a severe dental infection.”

Amnesty International said Zeinab Jalalian needed urgent dental treatment and added, “The medical staff at the prison have requested her transfer to a dental clinic outside the prison to receive treatment for a severe dental infection, which she has had for three months. Despite this, the authorities have denied the request, citing the ‘security’ nature of her case as justification.”

Zeynab Jalalian also has heart, intestinal, and kidney problems, as well as an oral thrush condition that has caused painful white bumps on her tongue and interferes with her ability to eat and swallow. She is at risk of losing her eyesight in prison as she is being denied surgery for a worsening eye condition called pterygium, which is impairing her vision and causing her severe discomfort. The right side of her body is numb, the reason for which remains unknown, as she has not received any diagnostic tests. Additionally, she is experiencing dips and spikes in her blood pressure, which the prison doctor has said is linked to the stress and psychological pressure she is under.

She has repeatedly asked the prison authorities to take her to a hospital outside the prison for specialized testing and treatment for her health problems but the authorities have either rejected outright her requests or have accepted them on the condition that she make videotaped “confessions.”

She has been refusing all medication since March 2017 in protest at the authorities’ refusal to provide her with adequate medical care. Following a meeting with the head of Khoy prison around the beginning of June 2018, she said that, if the authorities continued to deny her access to a dentist, she would escalate her protest, without specifying what measures she would take.