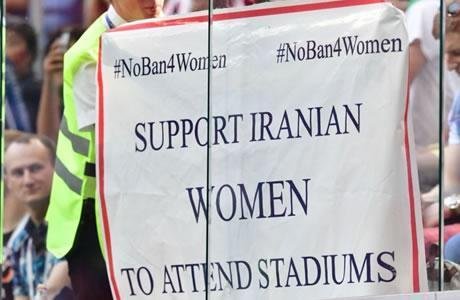 Ban on women’s entrance to sports stadiums in Iran

Ban on women’s entrance to sports stadiums in Iran made headlines this week again in light of the FIVB Volleyball Nations League.

Rahmani Fazli, member of the mullahs’ parliament (Majlis), announced that the Ministry of Sports is opposed to women’s presence in sports stadiums. In response to a question on ban on women’s entrance to sports stadiums, Fazli said, “The Ministry of Sports has announced in writing that ‘we cannot accept the responsibility of women’s security alongside men in stadiums.” (The official IRNA news agency – June 21, 2018)

Tehran will be hosting the teams from Bulgaria, South Korea and Germany in the FIVB Volleyball Nations League from June 22-24.

An official of the Volleyball Federation talked to IRNA news agency on June 17, 2018, on condition of anonymity on the ban on women’s entrance to sports stadiums. He said, “The conditions for the entry of women spectators is similar to last year and nothing has changed.”

The tickets for the Nations League are sold on the internet, and interestingly enough, there is a separate section on the website for sale of ticket to women but once the option is chosen, the message reads, “The quota for this game does not include enough tickets for sale as requested.” (The official IRNA news agency – June 17, 2018)

Last month, the Minister of Sports attended a meeting with the Sports Commission of Majlis on May 7, 2018, regarding the ban on women’s entrance to sports stadiums. After the meeting, Ahad Azadikhah, member of the parliamentary Sports Commission, cited the minister as saying that the entry of women spectators to closed stadiums to watch volleyball, basketball and track and field competitions has been resolved. With the approach of the Volleyball Nations League, however, it has become clear that the ban is still in force.

The ban on women’s entrance to sports stadiums and volleyball games has been officially enforced since 2013 by the State Security Force. Since then, the problem of Iranian women’s entry to stadiums has remained unsolved.