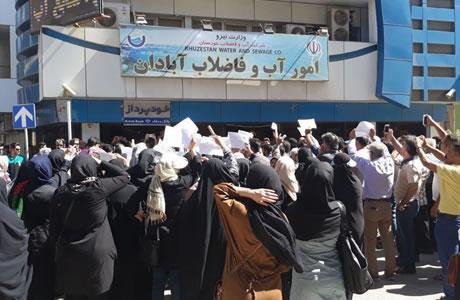 Iranian women continue to actively participate in protests of various sectors of Iranian society. Their presence was prominent in recent days in protests and demonstrations in Abadan, Tehran and Iranshahr.

In Abadan, the second largest capital of the oil-rich Khuzistan Province, southwestern Iran, a group of residents held a protest on Wednesday, June 20, 2018, across from the Department of Water and Waste Water in the city. Women’s participation was prominent and active. The protesters demanded healthy drinking water, while the so-called potable water they are provided in Abadan is salty and has foul odor. Nevertheless, people have to pay for the rotten water.

Iran suffers from water crisis particularly in the south, but relevant officials are not taking any effective measures to resolve this problem. On the other hand, there have been reports that good potable water is being exported to other neighboring countries from the same cities that desperately need them.

Young Iranian women continue to actively participate in protests against heavy sentences issued for students arrested during the winter uprising in Iran.

Thursday, June 21, 2018, students of Tehran University’s School of Social Sciences continued their protest for the fifth consecutive day against illegal and heavy sentences issued for students of this university. Young women’s presence was prominent and active. They threatened to boycott the term’s final exams if their demands are not met. They demand immediate and unconditional repealing of the students’ illegal and heavy sentences and granting them the right to continue their education.

On Tuesday, June 19, 2018, a group of residents of Tehran who have been plundered by the fraudulent Caspian Institute staged a protest march around Argentine Square. Women actively led the march and chanted slogans against officials who lie about having reimbursed their money.

On the same day, in Iranshahr, southeastern Iran, a group of women gathered outside the Governor’s Office in this city and protested against gang rape of 41 young women and girls, demanding the arrest and punishment of the culprits.