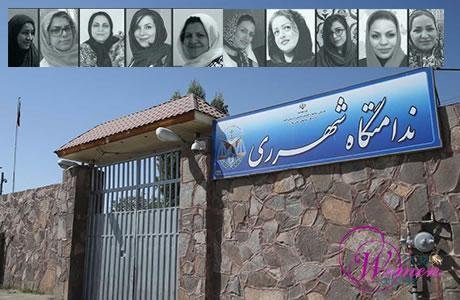 Hunger strike of Sufi women in protest to their ill-treatment by prison guards in Qarchak prison of Varamin passed the tenth day.

The hunger strike of Sufi women in protest to their ill-treatment by prison guards began on Monday, June 11, 2018, with six sufi women participating.

The names of those participating in the hunger strike of Sufi women in protest to their ill-treatment are: Shokoufeh Yadollahi, Elham Ahmadi, Sepideh Moradi, Nazilla Noori, Maryam Farsiabi, and Massoumeh Barakouhi.

Sedigheh Khalili, the mother of Sepideh Moradi, explained about the hunger strike of Sufi women in protest to their ill-treatment in Qarchak Prison. She said, “On June 11, when these women were outside, one of the prison guards closed the door and made them stay for three days and nights in a narrow dark corridor between the ward and the courtyard. On the same day, the women started their hunger strike. Three days later, on Wednesday, June 13, prison guards allowed them back into the ward, but shortly afterwards, 4-5 dangerous prisoners were incited by the guards to attack the sufi women. That is when the latter started shouting Ya-Ali. Then the Special Guards raided the ward and female agents started beating them with batons and shockers.”

The participants in the hunger strike and five other sufi women have been imprisoned in Qarchak Prison since February 20, 2018, under inhuman conditions.

According to judiciary and SSF officials as well as sources of Gonabadi Dervishes, more than 300 Gonabadi dervishes were arrested and imprisoned during the crackdown on the sufis’ peaceful protest. Some 150 of them have so far received heavy and light sentences.

The US Secretary State also reacted to the recent arrests in Iran in a tweet and wrote, “5,000 Iranians arrested in January’s protests. 30 women jailed for protesting the hijab. Hundreds of Sufi dervishes, dozens of environmentalists, 400 Ahwazis, 30 Isfahan farmers – all imprisoned by Iran’s criminal regime. Iranian people deserve respect for their human rights.”