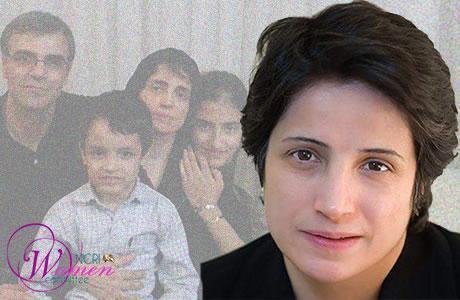 Challenging independence of the Iranian Judiciary, human rights lawyer Nasrin Sotoudeh wrote an open letter from inside Evin Prison, explaining the reason for her arrest and outlining her positions to inform her fellow compatriots.

Ms. Sotoudeh was arrested at home on June 13, 2018, and transferred to Evin Prison. She is presently detained in the general ward for women on what she describes as unfounded and spurious charge of anti-regime propaganda for defending protestors to the compulsory veil.

She has refused to accept a 650-million-touman bail bond set for her release, saying it is not proportionate to the charge leveled against her.

Challenging independence of the Iranian Judiciary, Ms. Sotoudeh wrote an open letter from prison, entitled, “A word with my compatriots,” which was published on June 23, 2018.

A translation of the text of her letter challenging independence of the Iranian Judiciary follows:

I, Nasrin Sotoudeh, attorney-at-law, was arrested for a second time on June 13, 2018, and taken to Evin Prison. As in the previous time, I was arrested this time, too, for defending cases which are not deemed acceptable by the Ministry of Intelligence and the Judiciary Branch.

For years, the Judiciary has openly and clearly sided with and supported the security powers including the Ministry of Intelligence and the Revolutionary Guard Corps (IRGC). And contrary to all principles regarding the need for independence of this branch, it has implemented the orders issued by the said powers.

This time, however, the complainant in my case is Mr. Mehdi Paytam, the inspector of the 3rd Branch of Kashan’s Prosecutor’s Office who was in charge of dealing with the case of my client, Shaparak Shajarizadeh.

The inspector who was furious at my client –for posting a picture of herself without covering her hair, on her Instagram account– and did not expect anyone to defend her, turned mad at me for my involvement to defend her case in accordance to my legal duties.

He was so mad that he ordered the guard, stationed at the 3rd branch of the Prosecutor’s Office of Kashan, to frisk me. Of course, I prevented the guard from doing so because the reason for such an order was illegal.

The inspector, however, had issued a detention sentence for an absolutely legal measure on the part of my client. Ultimately, he was compelled to order my client released. Then, he turned his fury and rage against me by filing a complaint with the Security Court at Evin Prison.

The inspector’s measure was illegal for the following reasons:

This is but part of the dangers Iranian lawyers face on a daily basis, which are ironically ignored by silence of the Bar Associations.

Nevertheless, I would like to loudly declare and once again emphasize the need to observe the requirements of practicing law, in the absence of which justice will be non-existent.

Practicing law needs professional skills, accompanied by audacity and courage, particularly that we are living under a regime that exceeds all boundaries. (In such circumstances,) it is vitally important to insist on the independence of the Institution of Law; in the absence of this requirement, all of our rights are going to be trampled as never before, without us being able to identify the culprits in such aggressions.