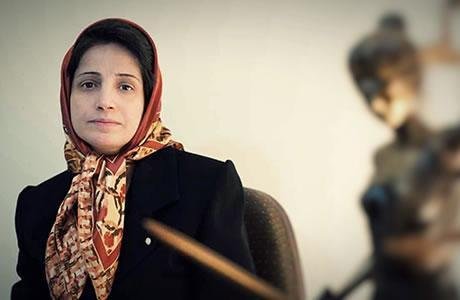 Human rights lawyer Nasrin Sotoudeh rejected her bail of 650 million toumans ($150,000). She has been imprisoned on the charge of propaganda against the state for defending protesters against the compulsory veil but refused to go free on bail of 650m.

In an interview with the state-run ISNA news agency on June 23, 2018, Reza Khandan reported on the 650m-touman bail set for the release of his wife, human rights lawyer Nasrin Sotoudeh.

Mr. Khandan said, “My wife believes the charges against her are unfounded and fabricated, and the bailbond unproportionate. She is presently detained in the general ward for women in Evin Prison.”

Human rights lawyer Nasrin Sotoudeh has been arrested for defending protesters against the compulsory veil. In a brief phone call from Evin Prison on Saturday, June 16, 2018, Ms. Sotoudeh said she had been detained in connection to the case of Shaparak Shajarizadeh.

Subsequently, the human rights lawyer Nasrin Sotoudeh wrote an open letter, explaining the reason for her arrest and outlining her positions. In parts of this letter addressed to her fellow compatriots, human rights lawyer Nasrin Sotoudeh wrote, “For year, the Judiciary has openly and clearly sided with and supported the security powers including the Ministry of Intelligence and the Revolutionary Guard Corps (IRGC). And contrary to all principles regarding the need for independence of this branch, it has implemented the orders issued by the said powers…

“Nevertheless, I would like to loudly declare and once again emphasize on the need to observe the requirements of practicing law, in the absence of which justice will be non-existent.

“Practicing law needs professional skills, accompanied by audacity and courage, particularly that we are living under a regime that exceeds all boundaries. (In such circumstances,) it is vitally important to insist on the independence of the Institution of Law; in the absence of this requirement all of our rights are going to be trampled as never before, without us being able to identify the culprits in such aggressions.”