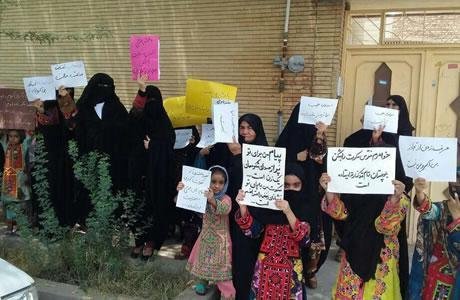 Women participated in protests actively on various occasions in recent days. They took part in protests in Tehran, Bushehr and Iranshahr against housing and water shortages, the heavy sentences handed down for the protesters arrested in December and January, and violence against women.

On Saturday, June 23, 2018, in the Province of Bushehr, women participated in an act of protest against 55 days of water cut-off in Dashtestan. The protesters blocked the road at Vahdatieh T-junction. One of the women participating in this protest said, “We have no drinking water, and we have no water for bathing and laundry.”

Bushehr Province is located in southern Iran and lies along the Persian Gulf coast. It is the country’s 17th largest province. The people of Dashtestan have been suffering from lack of water despite hot summer weather.

On the same day, young women and men studying at Tehran’s Allameh Tabatabii University held a protest against the heavy sentences issued for the students who have been arrested and detained since December and January during the Iranian people’s uprising. The students signed a petition in solidarity with the arrested students and activists. They held placards which read, “Your honor, we are innumerable.”

The students of Social Sciences at Tehran University have already held five days of protest against heavy sentences issued for their fellow student activists. Young women have been remarkably active in these student protests.

In another development on Friday, June 22, 2018, women participated in protests by housing applicants against the government-backed Maskan-e Mehr Contractor.

After six years, when they paid to buy an apartment, their housing has not been granted and they have been left without any place to live. The applicants for Maskan-e Mehr housing paid their money during Ahmadinejad’s presidency but have not received any response since then. Now, they have set up tents outside the site where their promised housing is supposed to be located.

Also on Friday, June 22, 2018, a group of Iranian teachers and activists, many of them women, held a protest in Laleh Park in downtown Tehran and demanded freedom of imprisoned teachers.