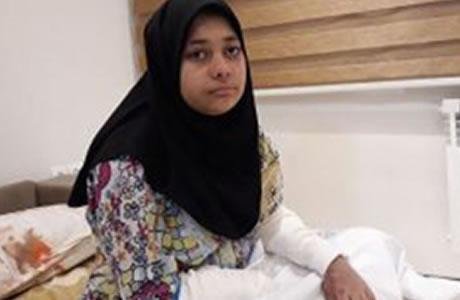 15-year-old girl student Fatemeh Rezaii lost her limbs in an explosion in one of the high schools of Kuhdasht.

The father of this 15-year-old girl student gave an interview to the state-run Tasnim news agency where he said, “I sent my daughter to school, not to a war zone.”

Based on what Fatemeh’s father said, the explosion took place on Tuesday, February 27, 2018, at Hijab High School in Kuhdasht, located in Lorestan Province, western Iran.

Fatemeh Rezaii and two of her classmates intended to post some sheets of paper on the board at the request of their teacher.

The 15-year-old girl student had picked up a metal object from the floor to hammer a nail into the board. The object exploded at the fourth hit at the nail. The explosion threw her to the ceiling of the classroom and she fell down on the floor while drenched in blood.

The wave of explosion cut her right hand from the wrist and wrecked the left hand and foot of this 15-year-old girl student. Her left eye and the left side of her face have been injured and her body has been pierced by shrapnels.

Mr. Rezaii has been handicapped in the Iran-Iraq war. He has a small car repairshop which earns him a low income. He has paid for all the medical expenses from his own health insurance and received no help from the Education Ministry officials. “I had expected the officials to provide care for my daughter,” he complained.  (The state-run Tasnim news agency – June 23, 2018)

Lack of government control on the safety of Iranian schools has led to similar incidents on many occasions, inflicting severe injuries on school children.

A worn-out heater exploded five years ago at a girls’ elementary school in Shinabad, a village near Piranshahr in West Azerbaijan Province (northwestern Iran), leading to the deaths of two young girls and injury of some 30 girl students.