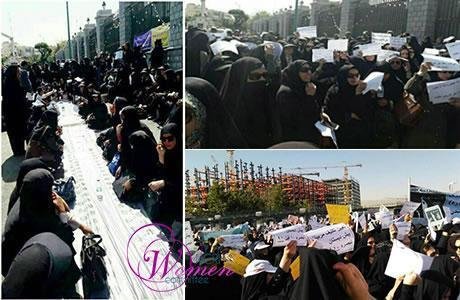 Women’s protests continued on Sunday, June 24, 2018, with the gatherings of female teachers and students.

Simultaneous with the strikes of Bazaar merchants and extensive protest demonstrations in Tehran which has continued into Monday evening, women’s protests were held in Tehran and Ardabil by teachers and the staff of the Education Ministry.

In Ardabil, capital of Ardabil Province in northwestern Iran, a large number of teachers gathered outside the Department of Education in this city and demanded the ministry to determine their employment status. In a symbolic act, the protesters who were mostly women spread empty tablecloths across the floor to express their discontent over their deplorable living conditions.

On the same day, a number of teachers working on temporary contracts and teaching assistants working for the Literacy Movement, including a large number of women, gathered in protest outside the mullahs’ parliament (Majlis) in Tehran. The protesting teachers demand that their employment status be changed from temporary to permanent through passing of a legislation at the parliament.

The legislation has been already examined several times on the Majlis floor to determine the employment status of teachers working on temporary contracts as well as the teaching assistants working for the Literacy Movement, but has been referred to the Education and Research Commission for further corrections. In the absence of any effective measures to deal with the employment status of teachers and teaching assistants, they have been left in limbo.

Student protests in Tehran’s Allameh Tabatabaii University continued for a second day on Sunday, June 24, 2018. Female students were actively involved. The protest was against heavy sentences issued for the students arrested in the uprising in January. The student protesters at Allameh Tabatabaii University continued to collect signatures for their petition in solidarity with the arrested students.

Also, in the afternoon of Saturday, June 23, 2018, the people of Bushehr blocked the Bushehr-Shiraz road in the Daleki region of Bushehr Province (southern Iran), to protest the officials’ failure to resolve the water cut-off. The road remained blocked until 5.30 p.m. and the protesters, including many women, did not allow cars to pass through.