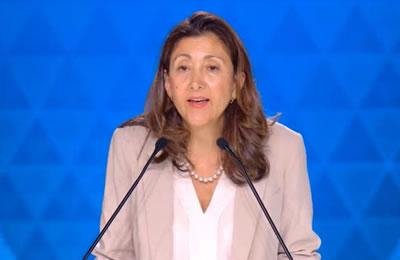 We are with the women of Iran in every step, in every heartbeat

Since last December 28, we are witnessing how Maryam Rajavi has been delivering what she promised.

Here, in the same forum, some years ago, she announced 1,000 Ashrafs to topple the corrupt theocratic dictatorship in Iran. And that is happening, right now.

Maryam Rajavi’s determination has brought these 1,000 Ashrafs to life inside Iran, but it is the courage, the sacrifice paid with blood and the love of those who are fighting in the streets in all the provinces, in all the capitals, and also in Tehran that will bring this uprising to victory.

To the thousands and thousands of women leading the protests, to the mothers, daughters, wives, and sisters of the martyrs of the 1988 massacre, to the young people of Iran throwing stones, burning the dictator’s portraits, attacking the stronghold of the corrupt regime of the mullahs, to the 80 millions of Iranians held hostage by the Iranian tyrants, we are with you in every step.

A journalist asked me today (I don’t know why he asked me), if President Trump was officially supporting Maryam Rajavi and the MEK. Listen to Rudy Giuliani, I answered. He is not only the attorney of President Trump, he is also at the core of the brilliant minds responsible for the strong support to the Iranian opposition. And you can see here the thousands of people coming from all over the world, from all the countries, supporting the opposition in Iran.