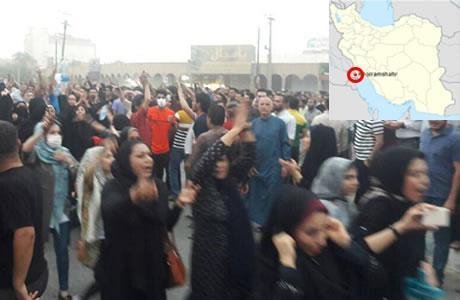 Women of Khorramshahr protested against lack of clean drinking water by actively participating in the large scale protests in this key port city of southwestern Iran. Their protests started on June 29, climaxed on June 30, 2018, and continued for three consecutive days. The city’s atmosphere continues to be volatile.

The women of Khorramshahr and the residents of this city are fed up with the lack of clean drinking water. Their drinking water is salty.

On Friday, June 29, 2018, they gathered in front of the Jame’e Mosque of Khorramshahr and disrupted the Friday prayer. A considerable number of women were among the protesters who held their empty 20-litre vials and chanted angry slogans.

The protests by women of Khorramshahr and residents of this city on Friday continued into the night. One of the video clips sent from inside Iran shows a courageous young woman standing to the State Security Force (SSF) officers and loudly protesting them.

The protests by women of Khorramshahr and the residents of this city continued on Saturday, June 30, 2018, and led to extensive street hit-and-run clashes at night after the Revolutionary Guard Corps (IRGC), the SSF, and the anti-riot units attacked the gatherings of youth.

Barrages of shooting could be heard throughout the night. Young men and women of Khorramshahr confronted the regime’s troops empty-handed. They chanted “death to Khamenei”, “death to Rouhani”, “death to the Islamic Republic”, “the mullahs must get lost”, etc.

A number of youths were hurt and wounded as a result of direct shooting and lobbing of tear gas canisters. Security forces damaged the new bridge of Khorramshahr and damaged people’s shops and properties to prepare the grounds for further crackdown.

On Sunday, July 1, 2018, the families of those arrested gathered outside the SSF station and demanded release of their children and relatives. The city continued to be restive and special guards lined up the streets. Intelligence and plainclothes against raided people’s residences in various neighborhoods on Saturday night and Sunday morning and made dozens of arbitrary arrests.

Other Khuzestan cities rise up in solidarity

The three-day uprising of the people of Khorramshahr was supported by the people of Ahwaz, Abadan, Mahshahr, Karoun, Sarbandar and Khor Moussa.

The months-long water crisis in Khuzestan and lack of clean drinking water in Khorramshahr and other cities happens while the mullahs have been exporting their drinking water to Iraq. They have also founded private companies to dig deep wells and sell them the drinking water that is their own.

On June 20, people of various parts of Khuzestan province including Abadan rose up and protests against lack of clean drinking water.