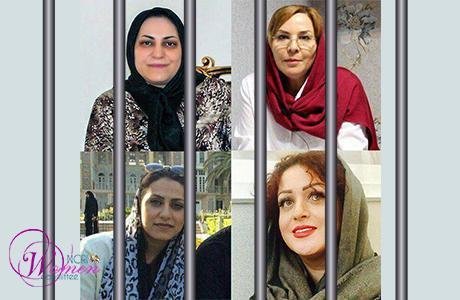 Four women dervishes detained in Qarchak (a.k.a. Shahr-e Ray) Prison in Varamin have been sentenced to 20 years in prison on the charge of “association and complicity to disrupt national security.” The Revolutionary Court sentenced Nazilla Noori, Avisha Jalaleddin, Sima Entessari and Shima Entessari, each to five years in prison.

Ms. Nazilla Noori had been transferred to hospital to undergo an operation, but security forces said she had to be tied to her bed by handcuffs and shackles, otherwise she would be returned to prison. Ms. Noori was also deprived of being visited by her relatives in hospital.

The four women dervishes and other women belonging to Gonabadi dervishes were deprived of their legal rights in detention, including separation of prisoners of different categories, contact with their families, as well as medical care and treatment. They were also subjected to various forms of physical and psychological tortures and did not have access to a lawyer.

The four women dervishes were among 11 who had been arrested and brutalized during the bloody crackdown on the protest of Gondabadi dervishes on February 19 and 20, 2018, in Tehran’s Golestan-e Haftom Avenue and transferred to Qarchak or Shahr-e Ray Prison in Varamin.

Two of the eleven women dervishes have been released. Ms. Shahnaz Kian Asl was released due to her dire health conditions and Ms. Massoumeh Barakoohi on the order of the 15th Branch of the Revolutionary Court.

According to sources tied to Gonabadi Dervishes and the clerical regime, over 300 Gonabadi dervishes were arrested and detained in the crackdown on the February 19 protest. The men are detained in the Greater Tehran Penitentiary.

Mohammad Salas, arrested during this protest, was executed on June 18, 2018, in Gohardasht Prison, in Karaj, despite international calls to save his life, arousing vehement outrage in Iran and abroad. He was accused of murdering three security forces, a charge that he had categorically denied, as he had been arrested three hours before the incident.