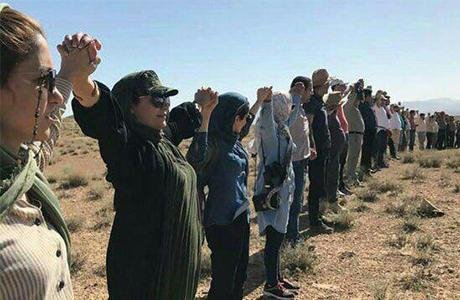 Iran women played an active role in recent days in the protests held by various sectors of Iranian society in different cities.

On Tuesday, July 3, 2018, people swindled by the Caspian fraudulent credit institute including a large number of women held a protest outside the mullahs’ parliament in Tehran. They chanted, “Our money was a deposit, you have betrayed our trust”, “Rouhani, the liar, where is our money?”

In Rasht, the plundered clients of Caspian held a protest with the active presence of Iranian women against the swindling of their property. They chanted, “Let go of Syria, think of us; what have the hands behind the scence done to our money?” One of the angry women participants in this protest told the SSF agent at the site, “You are protecting a thief.”

On Sunday and Monday, too, Iran women played an active role in protests by students and environmental activists.

In Isfahan, a human chain formed by environmental activists was held on Monday, July 2, 2018. They were protesting the transfer of a mine in Maymeh to a seminary school in Isfahan. Iran women played an active role in this protest.

Iran women played an active role also in the student protest in Tehran’s Science and Industry University on Sunday, July 1, 2018, where they held a protest in solidarity with students of Tehran University, Noshirwani University of Babol, Jondi-Shapur University of Ahwaz, Tabriz University, and other universities, demanding repealing of the heavy sentences issued for students arrested during the uprising in December and January.

Residents of Rasht, including a large number of women, held a protest on Sunday, July 1, 2018, outside the Power Deparment because of frequent cut-offs of power. A courageous woman stood up to the security forces at the Power Department and loudly expressed her protest and complaints about the intolerable problems she faces.

On the same day in Mashhad, in a protest held by clients of Pardisban Company in Koohsangi, Iran women played an active role. Swindled men and women demanded clarification of the status of their deposits. Since four years ago, no government official has taken action to respond to their demands.