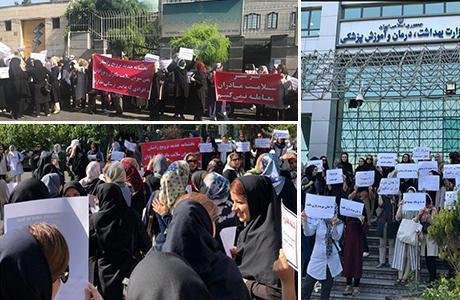 Women gynecologists held a protest in Tehran on Tuesday, July 3, 2018. Participants had come together from various Iranian cities. On the same day, students applying for studying as assistant doctors or dentists also held a protest.

In Tehran, more than 200 women gynecologists held a protest in Tehran against the unscientific, mandatory promotion of natural delivery. The protest took place outside the Medical System Building in North Kargar Ave. in Tehran.

One of the women gynecologists held a placard which read, “We won’t make a deal over the health of mothers.”

Women gynecologists held a protest in Tehran while their colleagues joined them from Mashhad, Birjand, Shiraz, Isfahan and Tabriz to express their opposition to the directive of the Ministry of Health.

The protesters say the directive, issued several months ago by the Ministry of Health, contains many flaws and is not transparent in many sections. It guarantees payment of more money by patients and midwife-patient relation is built on money.

The women gynecologists say the directive would bring about many problems for pregnant women, contributing to more deaths during delivery. A representative of the protesting women gynecologists told the official IRNA news agency, “We have not received any proper answer from the Ministry of Health, so far. We are demanding immediate suspension of this directive so that we would not have to witness risks for pregnant mothers. We believe this decision has been wrong. We are hoping that this directive won’t be put into force because it would entail a lot of harm to the mother and her fetus. If we do not hear from them, and if the directive is not revoked, we will gather again and demand clarification of this situation and the status of the directive.”

On the same day, a group of volunteers who participated in the college entrance exam to become assistant physicians or dentists held a protest outside the Ministry of Health. They were protesting the results announced for the tests and implementation of the new quotas which include 65 per cent of all admissions.