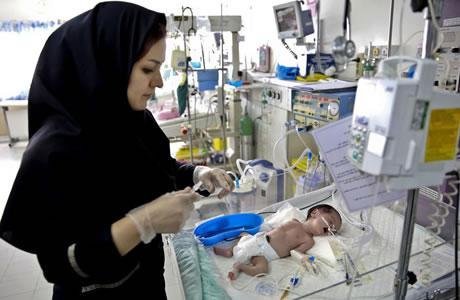 Kowthar Maternity Hospital in Orumieh lacks minimum medical facilities to offer the necessary medical services to women who refer to this hospital for delivery.

A report published on July 6, 2018, by the state-run Tasnim news agency indicated that the Kowthar Maternity Hospital in Orumieh is the only maternity hospital in this city, the capital of West Azerbaijan Province, in northwestern Iran.

The former Governor of West Azerbaijan has been cited as saying that there has been no improvement or change in the hospital over the past 30 years.

The capital city of Orumieh has a population of 73,000.

Presently, there are 24 medical centers and hospitals in different cities across West Azerbaijan Province, 21 of which are very old.

Kowthar Maternity Hospital in Orumieh was supposed to be relocated four years ago and receive new equipment and facilities, a promise that has not been delivered. (The state-run Tasnim news agency – July 6, 2018)

Conditions of hospitals in West Azerbaijan Province show but a small part of the destruction of the country’s medical system under the mullahs’ rule. The country’s wealth is being spent on foreign wars in Syria, Iraq, etc. and on nuclear and missile projects while schools, universities and hospitals are getting worn out. Doctors and nurses are unemployed while hospitals are badly in need of more medical staff.