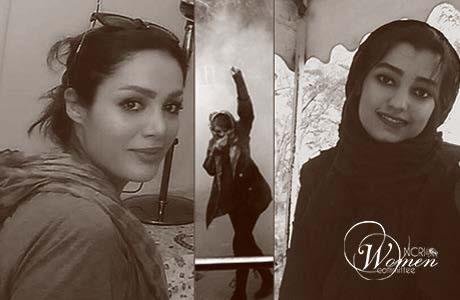 Sepideh Farhan (Farahabadi) is a graduate of architecture and a civil activist who was arrested by security forces during the uprising in late December and January. She was released from Evin Prison on a bail of 250 million toumans, on February 17, 2018.

More than 500 young women and girls, including dozens of female students, were arrested and detained in cities across Iran. Among them was Neda Ahmadi, a student of economy at Tabriz University. There has been no news on her since being arrested, and her status remains undetermined.

Courageous women played a leading role in the Iran Uprising in January. One of the commanders of the Revolutionary Guard Corps, Rassoul Sanaii Rad, confessed that “women were the main ringleaders inciting the protests.” (The state-run Jahan News website – January 27, 2018)

Women were numerous, loud and active in these protests, fearlessly confronting armed security forces despite being empty handed, encouraging everyone to join the protests, and fending off security forces trying to apprehend young protesters.

Students of Iranian universities have held dozens of protests in Tehran and other cities, including in Babol, Ahwaz, Tabriz and Shiraz, protesting the heavy sentences issued for the students arrested during the Iran Uprising. Young women were active in these protests. In some universities, professors also joined students to demand repealing of the verdicts issued for the arrested students.