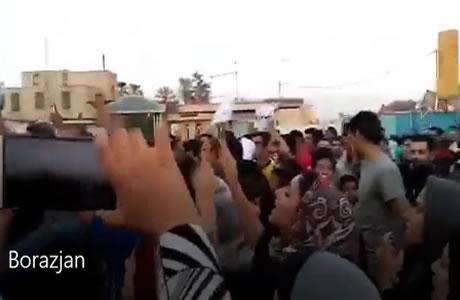 Women actively participated in protests against shortage of water in Borazjan. Their presence was also prominent in the protest in Mashhad and Shiraz.

Thousands of people in Borazjan, capital of Dashtestan county located in the southern Bushehr Province, held large scale protests on Saturday and Sunday, July 7 and 8, against severe water shortages in their city. The protests took place near Mellat Bank and in Bimarestan (Hospital) Square. Women actively participated in large numbers in the protests that continued until late at night.

The residents of Borazjan carried placards which read, “We have no water.” They chanted, “death to the dictator” and “Enough is enough, Iranians rise up and show your courage.”

Security forces had lined up all the main streets of the city and the Bimarestan Square to prevent protests from shaping, to no avail.

Many Iranian cities face water shortages in the heat of summer. Dashtestan county and other counties of Bushehr Province face numerous problems in this regards. Some of the villages receive water by tankers every three days, and some, every ten days. In many cities, people have to wait long hours in line to get a jerrycan of drinking water.

Also in Mashhad, capital of Razavi Province in northeastern Iran, people defrauded by Caspian Institute held a protest gathering outside one of the company’s branches on Saturday, July 7, 2018, to demand their properties back. Women actively participated and led the chants in this act of protest.

On Thursday, July 5, 2018, students of the School of Medical Sciences in Shiraz held a protest demanding repealing of the heavy sentences handed down for students arrested during the December/January uprising in Iran. Women actively participated in this protest in solidarity with students of other Iranian universities in Tehran, Tabriz, Ahvaz, Babol, etc.