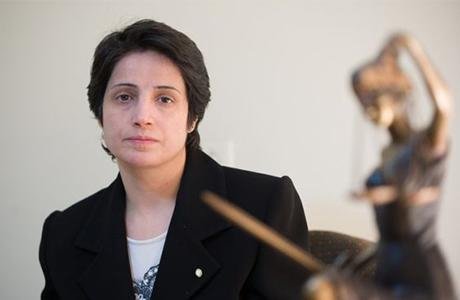 20-year jail sentence issued for Shaparak Shajarizadeh was an attempt by the Iranian Judiciary to terrorize the public, said human rights lawyer Nasrin Sotoudeh in an open letter from Evin Prison addressed to Tehran’s Prosecutor.

Nasrin Sotoudeh said in her letter that the jail sentence for anyone who protests the mandatory veil is usually around 1 or 2 years. The 20-year jail sentence seems to be a bid to terrorize the public particularly that the judge was aware that her client had already left the country.

Ms. Sotoudeh has been incarcerated since June 13, 2018, for defending women who protested the mandatory veil.

In the same letter, Ms. Sotoudeh said that she believed her own arrest and detention were also part of the same scheme.

There were two important points in your latest remarks which appeared in the newspapers on July 2, 2018, which prompted me to write you the following:

Mr. Prosecutor, as far as I remember from when I was not in prison, the sentence for people accused of a similar charge, used to be around one or two years. May be in the latest case whose trial was held two days before I got arrested, the judge issued an amazing verdict, because:

The judge was aware that my client had travelled abroad, so it was a suitable opportunity to teach others a lesson because as you also pointed out, the judiciary apparatus has basically turned into a tool which terrorizes the people and teaches them lessons, which is truly regrettable.

And if this presumption is true, then the order for my arrest was not without reason as I was the attorney defending the case. It seems that the complaint sent from Kashan by the inspector of the case was not accidental or based a personal decision.

Mr. Prosecutor, the public opinion is shocked by the Judiciary’s reaction to acts of flouting the veil while it is grimly silent with regards to those who splash acid on women or commit rape.