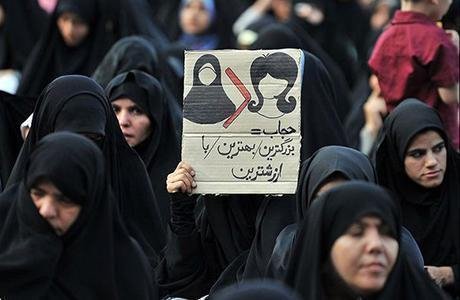 Week of mandatory veil has been launched in Iran’s 31 provinces starting on July 10, 2018, to impose the compulsory veil on Iranian women.

The state-run ISNA news agency reported that Minoo Aslani, president of the Women’s Society of Bassij, announced on Sunday, July 8, 2018, that the “Chastity and Veil” Staff (Setad-e Hijab-o Efaf) has been formed to launch campaigns in all 31 Iranian provinces in the heat of summer, enforcing further controls on Iranian women and obliging them to observe the mandatory dress code imposed by the regime.

Bassij is the paramilitary force affiliated with the Revolutionary Guard Corps (IRGC) which recruits ordinary citizens to suppress the public.

Aslani said the campaigns are going to feature poetry recitals, gatherings, marches, and street plays to promote Chastity and Veil among women. One such undertaking is giving flowers to women in the metro stations. A gathering called the “Heavenly Veil” is also one of the components of this project. Gatherings of young girls in Jamkaran mosque (where major meetings with the mullahs’ supreme leader are held), of protectors of privacy of families, and a gathering called “the sanctum of beauty” are also planned for the week of Chastity and Veil.

The state-run media also reported that a so-called cultural event under the name of “A Nice Feeling” has already been held in districts 2 and 5 of the capital where foreign women wearing the veil approached 50,000 Iranian women wearing non-standard Hijabs on the streets and attracted 9,000 of them into their stall.

In another development related to the week of mandatory veil, a regime official announced that over 2,000 special programs will be held in Mazandaran Province.

Umm os-Sadat Rakhshandeh, in charge of the Women’s Society of Bassij in the IRGC Karbala Corps of Mazandaran, held a news conference on Sunday, July 8, 2018, in Sari, capital of Mazandaran Province in northern Iran.

Rakhshandeh announced that in the week of mandatory veil lasting from July 10 until July 16, over 2,000 special programs will be carried out throughout the province to promote the culture of Chastity and Veil.

She pointed out that during the week of mandatory veil, “advisory stations” will be set up in public places, parks and beaches to give warnings to women in these social settings.  (The state-run ISNA news agency – July 8, 2018)

The clerical regime spends exorbitant sums on the week of mandatory veil to enforce and impose the compulsory dress code on Iranian women while people across the country are fed up with water shortages and power cut-offs in the heat of summer, and various sectors have not received their salaries for months.