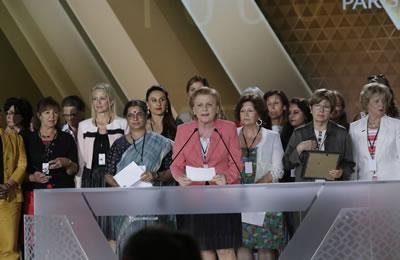 Days are numbered for tyranny because Iranian women are coming

Deputy Speaker of the Albanian Parliament from 2013-2017, former Minister of Labor and Social Affairs, and Vice-President of the Parliamentary Assembly of the Council of Europe, 2015

Dear Madam Rajavi, the famous woman of hope and courage for liberty and freedom.

It is our privilege and honor to present a statement tonight in such a big gathering of supporters and people that fight for freedom.

And I quote now, “The women of Iran are resolved to turn the page of their country’s history in the 21st century, and they deserve the support of all freedom-loving people of the world.

“We, the undersigned to a joint statement by dignitaries and women’s rights advocates, support the following statement:”

Now, I would like to invite my colleague to read the statement.

Director of the Center for Social Research NGO in New Dehli, India, Chair of Women Power Connect, member of Facebook’s International Safety Advisory Board, and member of Twitter’s Trust and Safety Council

“The brave revolt of Iranian women against the regime is not to demand anything from this misogynistic regime; it is for ending the theocratic dictatorship in its entirety and establish democracy and freedom. Women are indeed the force for change in Iran. We support and celebrate the courageous women in Iran.

“The Iranian regime has been put on notice, first by the women of Iran and second, by the Iranian nation.

“People of Iran’s message to the Iranian regime is: Your days are numbered. Democratic change is inevitable and the alternative is here.

“The uprisings and protests in Iran are another manifestation of a four-decade long, glorious resistance against misogynistic tyranny.

“A free Iran is near because Iranians have clearly and openly made up their minds, demanding regime change and establishment of a republic based on the separation of religion and state.

All political prisoners and prisoners of conscience, particularly all female arrestees and those who are presently detained under torture must be released, immediately.

We seek support for the Iranian people’s call to free all prisoners.

We support the fearless efforts of Iranian women and Iranian Resistance to establish freedom and equality. We commend the relentless and visionary leadership of Mrs. Maryam Rajavi, President-elect of the National Council of Resistance of Iran, as the alternative for Iran. We also support Maryam Rajavi’s Ten-Point Plan for Women’s Rights in tomorrow’s Iran.

At this point, Ms. Ranjana Kumari invited Mrs. Rajavi on to the stage to present to her a plaque bearing the names and support of women NGOs.

President-elect of the National Council of Resistance of Iran

Mrs. Rajavi thanked the delegation and told the gathering in Farsi, “As you know, in the Iranian Resistance, women have been and will continue to be the force for change and pioneers of the movement against the religious dictatorship. Therefore, today, the presence of these women from all four corners of the world to express support for the Iranian women’s struggle, is extremely precious for the people of Iran, for the women of Iran and for the Iranian Resistance. Certainly, they will prove to be of great assistance (to our movement) in leading the ongoing uprisings to their fruition until the clerical regime is overthrown.”

Mrs. Rajavi then addressed the delegation in English, “Thank you very much. Once again, thank you for all your efforts in supporting the Iranian women and the Iranian Resistance and now, the uprising in Iran. I’m sure that one day, after the mullahs, the Iranian people can invite you to Tehran to a big celebration because a free Iran is not only necessary for the Iranian people, it is (also) necessary for the people in the Middle East and for peace and security in the world. Once again, thank you very much.