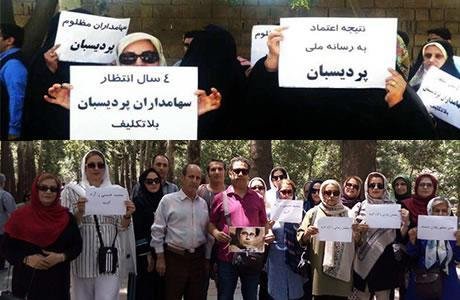 Women’s protests among different sectors of Iranian society have continued in cities across Iran.

Wednesday, July 11, 2018, saw women’s protests among the swindled clients of the Caspian fraudulent institute in Tehran. Plundered women and men gathered in front of Tehran’s Central Bank in protest to the loothing of their life long assets by this institute.

On Tuesday, July 10, 2018, women’s protests were held in front of the Sarparasti Branch of Caspian in Rasht, northern Iran. All the participants in this protest were women. They blocked the street several times. They chanted out loud and demanded their plundered assests.

On the same day, women’s protests were also held in Mashhad, northeastern Iran. Plundered women and men, clients of Pardisban Institute gathered outside the Judiciary building. They have not received their money after 4 years. Women protesters were holding placards which explained their undeterminated status and the oppression they have endured.

Again on Tuesday, July 10, residents of Barchi region in Sarcheshmeh in Kerman Province (southern Iran) including women gathered outside the Copper Complex to protest the critical water situation. They blocked the main road in this district.

Water crisis in most Iranian cities has turned to a social problem. In the past weeks, we have witnessed active protests including women’s protests in different cities of Iran including Borazjan, Khorramshahr, Abadan and Ahvaz (southwestern Iran). Some of the protests continued for several days.

Women’s protests were also held in Karaj, on Tuesday, July 10, 2018, where a group of teachers and staff of the Education Ministry from Alborz and Tehran provinces, the majority of whom were women, gathered in Fateh Garden demanding the release of imprisoned teachers including Mohammad Habibi.

In another act of protest, thousands of teachers participated in a nationwide campaign, starting on July 9, where teachers tear apart their pay slips.