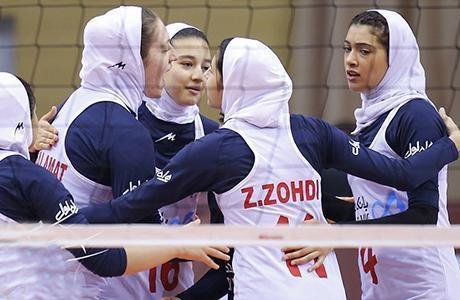 In an interview with IRNA state-run news agency on July 11, 2018, regarding Women’s volleyball in Iran , Marzieh Ebrahimzadeh, vice chair of Golestan Province’s volleyball board said, “Women’s volleyball in the province is expanding but Golestan’s industries are not prone to financially support women’s sports teams in national competitions. The fact that these competitions are not broadcast from TV is one of the reasons why the industries and factory owners have no desire to support this sport. Although women have earned a number of titles during the past few years, the road has not been paved for involvement of industries to provide constant financial support for women’s volleyball in Iran.” (IRNA state-run news agency – July 11, 2018)

No budget is allocated to women’s sports. This has not only affected women’s volleyball in Iran but resulted in disbandment of teams or cancelation of women’s competitions in many other sports fields.

The women’s basketball team of Gorgan, for example, with a 12-year record had to pass over basketball’s super league because it didn’t have any financial support.  (The state radio and television news agency- November 17, 2016).

Girls’ futsal team of “South Pars Jam” could not attend its competition due to lack of funds, and the match was easily cancelled. (Iran Wire News Agency, November 3, 2017)

The under-16 girls’ basketball team, which made it to Asian competitions was eliminated from the games because of the Iranian Basketball Federation’s debt to FIBA.

During the Asian Cup matches, where Iranian women’s futsal team won over Japan and became Asia’s champion, the regime’s failure to broadcast the championship match turned into a political challenge for the regime. (Etemad state-run daily- May 13, 2018)

Women’s sports in Iran have no government support and women face numerous obstacles for participating in international tournaments. Broadcasting women’s competitions from TV is banned. Even female reporters are not allowed into the stadiums where these matches take place.