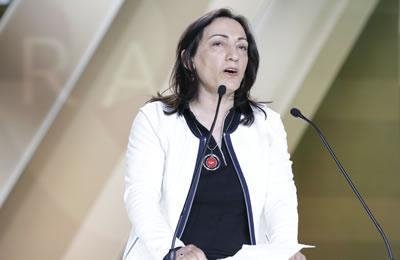 Iran’s oppressed people have conveyed their message to the world

Representative of the Fedayeen Guerrilla Organization of Iran, and member of the National Council of Resistance of Iran

Hail to you who have endeavored for the past four decades in the Iranian Resistance movement and advanced it to this point.

Today, the fruit of the efforts, struggle and resistance of several generations has blossomed in Iran’s cities, towns and villages, and the decisive majority of the people of Iran are saying no to the Islamic Republic with their struggle.

At the forefront of this struggle are blue and white-collar workers, teachers, nurses, farmers, youths, and especially women. The chants of the arisen people of Iran indicate that they are no longer willing to tolerate intimidations, oppression, and injustice.

The reality is that the confrontation of the people of Iran with this regime has entered a new stage since last winter.

People believe in themselves more than ever to change the ruling regime and to participate in determination of their own destiny. It is most cleat that the people want change not from within the regime or by foreign intervention, but through their own struggle and resistance.

Those who under different pretexts seek to scare people of another Syria, either ignore the reality of the fight of women and men of this land or have specific interests in doing so.

The result of preserving the status quo and prolonging the life of the Velayat-e-Faqih regime has devastated the Iranian people. Oppression, injustice, wasting of the environment and its water resources, drought, poverty and destitution are not only for the people of Iran but also for the peoples of the Middle East.

On the anniversary of June 20, the Day of Martyrs and Political Prisoners, we treasure the memory of all those who fell for freedom, planting and watering the seeds of resistance with their precious lives.

How beautiful and glorious it would be to commemorate all of them in a free Iran without the religious tyranny of the Velayat-e-Faqih regime. The People’s Fedayeen Guerrillas Organization of Iran, as one of Iran’s resistance movements, wishes that this gathering would be held next year in a prosperous, free, and democratic Iran.

As Mrs. Maryam Rajavi put it, victory will come. We are the innumerable and we will unite to topple the religious tyrannical Velayat-e-Faqih regime.

Baha’ii student Sogol Zabihi was deprived of continuing her education