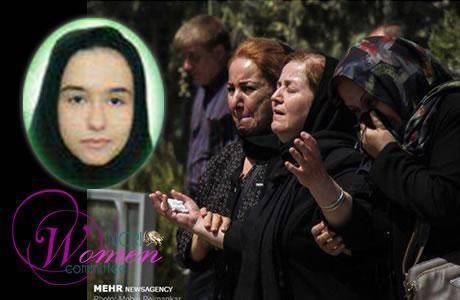 Elite student Sara Ayineh was among the 27 victims of a horrendous bus crash in Sanandaj, capital of the Iranian Kurdistan Province in western Iran.

Elite student Sara Ayineh studied biology at a high school for talented students and had passed the exam for the first stage of Science Olympiad for the 2017-2018 academic year.

On Wednesday, July 11, 2018, a fuel tanker belonging to the Revolutionary Guard Corps crashed into a bus outside the bus terminal of Sanandaj, as a result of which several cars caught fire and at least 27 of their passengers, including the elite student Sara Ayineh, lost their lives.

After the harrowing accident, the people of Sanandaj took to the streets and voiced their protest against incompetent officials. They clashed with the State Security Force. Instead of tending to the wounded, anti-riot guards were dispatched to the scene to contain the riots.

On the following days, the people of Sanandaj laid flowers at the site of the bus crash in Dr. Hosseini Blvd. and pinned roses on the walls to pay tribute to the victims.

The death of the elite student Sara Ayineh is not the first example of girl students and elite students getting killed in road accidents.

On September 1, 2017, a bus carrying the elite girl students of Hormuzgan Province overturned on the road to a student camping site in Shiraz. Twelve students were killed in this accident and 34 were wounded and hurt. Three of them in critical conditions were transferred to a hospital in Shiraz and four students suffered severed spinal cord and amputated limbs.

Maryam Mirzakhani, the math genius who died last year of cancer in the United States, was among the survivors of a bus accident in March 1997 in Iran. The bus was carrying elite students from Tehran’s prestigious Sharif Industrial University when it drove off the road and crashed into a valley, killing seven students and two members of the university’s faculty of science.