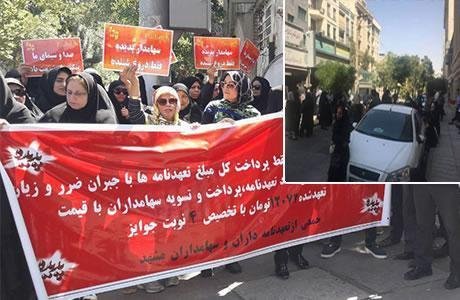 Nurses and teachers have held protests in recent days in Tehran and Qazvin (northwest of Tehran).

Some 300 women and men who work as nurses gathered on Saturday, July 14, 2018, outside the building of the Cooperative Credit Fund of the Nursing Organization in Tehran. They demanded to have their deposits refunded to them or receive the loans they have been promised.

One of the nurses participating in this protest said, “We have always witnessed that the rights of nurses have not been heeded in this country and in light of all their problems at work, this toiling sector expects the Nursing Organization to lend them more support for their demands regarding their income. More than 3,000 nurses from across the country are members of this fund and they have invested in this fund to receive interest-free loans of 30 or 40 million toumans. They had expected that when the deadline comes after nine months of depositing in this fund, they could receive their loans, at least equal to the amount they have deposited. Now that the time has come for them to grant the loans, the fund refuses to do so and does not even reimburse our deposits.”

She added, “Many nurses have been depositing their assets and the product of their toil in this fund for more than nine months to receive interest-free loans. But this Cooperative Credit Fund is not committed to the deadline set for granting the loans, and today, this institute does not even pay back its members’ money.”

This gathering is supposed to be continued in the coming days.

The teachers of Qazvin also held a protest on Saturday and Sunday, July 14 and 15, 2018, outside the General Department of Education in this city. They held a placard which read, “Despite 70% inflation, our salaries were increased by only 6 to 10 per cent.”

In another development in Mashhad, a group of investors in the Padideh Shandiz Credit Institute, including a number of women, held a protest on Saturday, July 14, 2018, and expressed their demands.