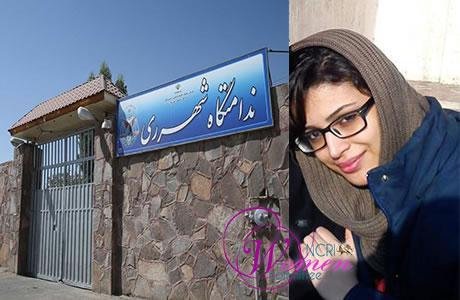 Sufi woman Sepideh Moradi refused to appear before the court on Saturday, July 14, 2018.

Imprisoned in Qarchak Prison (a.k.a. Shahr-e Ray) in Varamin, Sufi woman Sepideh Moradi Sarvestani is protesting denial of access to defense lawyers for Sufi prisoners and the prison authorities’ failure to observe the due process of law.

Sufi woman Sepideh Moradi was arrested after being badly brutalized during the bloody crackdown on the protest gathering of Gonabadi Dervishes in Tehran’s Golestan-e Haftom Ave. on February 19-20, 2018. She was beaten by batons and seriously injured in the arm, elbow and fingers. She also suffered burns in her legs as a result of being hit by teargas canisters used by security forces. The burn scars have remained on her body after five months since the incident. She has been denied medical treatment and care.

Like other Sufi women, Sepideh Moradi has endured insults, beatings and violence under interrogation and during detention in Qarchak Prison in Varamin.

On June 13, 2018, Sufi women were raided by special prison guards and badly beaten by clubs and shockers, upon incitements by ordinary criminals in the general ward. Subsequently, they were incarcerated in separate solitary cells where they were mistreated and harassed. As a result, six of Sufi women went on hunger strike for 16 days to protest the mistreatment.