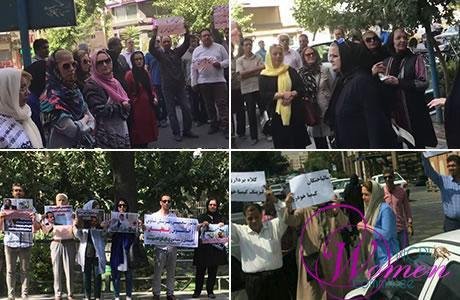 Women participated in protests of various sectors across the country, including teachers and defrauded investors. Women were also active in the protests over the water crisis.

They wrote in an open letter, “We can no longer remain silent in the face of so much discrimination. Therefore, we, the principals of Khomeini Shahr’s schools collectively resign in protests to so much injustice which also impact the students of this country.”

The teachers’ campaign of tearing up their pay slips continued with a considerable number of women participating.

On Thursday, July 12, 2018, a group of women and men, teachers of Qazvin, tore up their pay slips because their salaries did not match the amount of work and their difficult living conditions. These men and women participated in a gathering outside the General Department of Education in Qazvin.

On Wednesday, July 11, 2018, defrauded clients of Kimia Khodro in Tehran, including a number of women, held a protest outside the company’s office against its failure to deliver their cars several months after they paid for them to the company.

On the same day, a group of people of Abadan held a protest outside the Water Department against lack of water in this second major city of the oil-rich Khuzistan Province, in southwestern Iran. Women participated in the protest in Abadan and played an active role.

The water crisis has become a major dilemma in most Iranian cities, and in recent weeks, women participated actively in acts of protest against water shortages in Borazjan, Khorramshahr, Abadan, Ahvaz, among others. Most of these protests continued for several consecutive days.

Also in Robat-Karim district of Tehran, a group of applicants for Mehr Housings, including a number of women, held a protest because their apartments have not been delivered to them, 11 years after they paid for them.