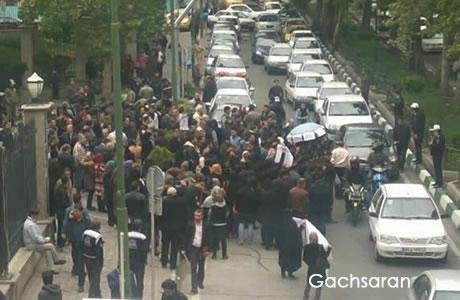 Iran women participated in protests by different sectors in Tehran, Gachsaran, Shiraz and Sanandaj, which actively continued on Sunday and Monday, July 15 and 16, 2018.

Defrauded investors of Tose’e Alborz Financial Institute, men and women, gathered on Monday, July 15, 2018, in Tehran’s Taleghani Street and marched towards the Ministry of Agricultural Crusade.

On the same day in Gachsaran, southwest of Iran, women and men swindled by Melal Institute gathered in protest and sealed the institute’s door. Gachsaran is the capital of a county in Kohgiluyeh and Boyer-Ahmad Province.

In other cities, Iran women participated in protests held by teachers and staff of education.

In a protest against unjust decrees, women teachers of Fars province, in southern Iran, gathered outside the General Department of Education in Shiraz and burned their pay slips on Sunday, July 15, 2018.

The Iranian teachers’ campaign to burn their pay slips began on Monday July 9, 2018, and thousands of teachers have joined it since. Iran women participated in this campaign, too.

Dismissed teachers of Kurdistan Province, in western Iran, gathered outside the Governorate’s building in Sanandaj and demanded their rights. All participants in this protest were women who held banners to express their complaints about poverty, unemployment and illness.

Another protest was held on Sunday, July 15, 2018, in front of the Sports Ministry. Men and women supporting Tehran’s Esteghlal soccer team participated in this protest because the ministry had not rehired the team’s main players. Twenty protesters were arrested. Iran women participated actively in this protest.

Iran women participated in at least 210 protests in the three months of April, May and June.