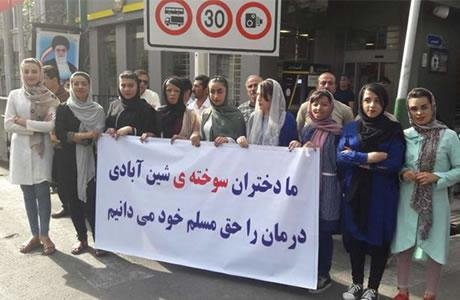 Shinabad girls held a protest in Tehran on Tuesday and Wednesday, July 17 and 18, 2018, across from the office of the mullahs’ president, Hassan Rouhani, on Pastor Avenue. Shinabad girls criticized officials for not responding to their needs, by refusing to issue them passports and to pay for their travel abroad and medical expenses.

Their lawyer, Hossein Ahmadi Niaz, said the Shinabad girls had been waiting for a week in Tehran to meet the ministers of Education and Health but received no answers. Finally, they were forced to stage a protest. “These girls did this to pursue their treatment and obtain their rights when they did not receive any response from relevant authorities,” he told the state-run news agency, ISNA. (The state-run Entekhab website – July 18, 2018)

Twenty-seven Shinabad girls suffered serious burns and two died in a 2012 fire accident at an elementary school in Shinabad village in Piranshahr, northwestern Iran. The fire was caused by a worn-out oil-heater in their class.

In another protest gathering in Tehran on Tuesday, July 17, 2018, defrauded men and women investors of Caspian institute, affiliated with the IRGC, gathered in protest in front of the institute’s branch on Sohrevardi Avenue.

On the same day, another protest gathering was held in front of the Golsar branch of this institute in Rasht, north of Iran. This protest was an all-women protest and they chanted against the government, the parliament, the three heads of branches, and other state agencies for stealing their money. They demanded their plundered properties.

Again in Tehran, hundreds of retired employees of Tehran banks gathered on Tuesday, July 17, 2018, outside the Bank Employees’ Retirement Fund to protest against the government’s failure to balance their pensions. A number of retired women also participated in this protest. They demanded the Fund’s CEO to either meet their demands or resign.

The retired bank employees complained of insufficient pensions, demanding that their pensions be balanced with other retired employees.

On Monday, July 16, 2018, plundered stock holders of Pardisban Enterprise in Mashhad, northeastern Iran, staged a protest gathering across from the Justice Department in Kohsangi. Women actively participated in this protest gathering.