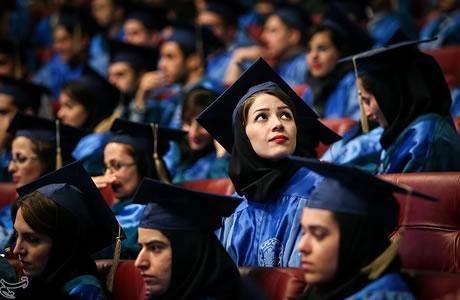 Azad University’s new management is concentrating on so-called “moral” issues in many of the university programs and affairs to suppress and impose further restrictions on female students.

A ceremony was held on Wednesday, July 18, 2018, to award the decrees of members of Azad University’s Council on Promoting Virtue and Forbidding from Evil. Officials addressing the gathering stressed on all-out efforts by Azad University’s new management to institutionalize the task of “promoting virtue and forbidding from evil”, gender segregation and harsher enforcement of the compulsory veil in Azad universities.

Mullah Ibrahim Kalantari, cultural and student dean of Azad University, reminded the 8-point cultural directive and stressed that it is banned to hold mixed-gender camping and concerts in all units and educational centers affiliated with Azad University.

In line with tougher measures to imposed the compulsory veil on female students, he said the “regulations on Chastity and Veil have been professionally examined, drafted and made fit for every location… Under Azad University’s new management, officials will be endeavoring full force to institutionalize (the compulsory veil and gender segregation) in the body of the university.”

Kalantari also stressed that the mullahs’ supreme leader, Ali Khamenei had personally instructed the Azad University’s new management to “create a revolution in cultural affairs” as their first mandate, which means “concentrating on promoting virtue and forbidding from evil.”

Also attending the meeting was Mehdi Hashemian, deputy director of the Central Staff of Promoting Virtue and Forbidding from Evil. Hashemian revealed that with the collaboration of the Ministry of Sciences and Azad universities, they had managed to hold “30 scientific gatherings on 30 issues related to promotion of virtue and forbidding from evil in universities all across Iran.” Ibrahim Kalantari was appointed in this ceremony has head of the Council on Promoting Virtue and Forbidding from Evil at Azad universities. (The state-run ISNA news agency – July 19, 2018)

Azad University is a private entity affiliated with the highest regime officials with numerous branches all across the country. At least 1.5 million Iranian students study in these universities (This data was released in 2012).

Azad University’s concentration on anti-vice activities, allocation of funds to the operations by agents of this council and holding numerous gatherings on “promotion of virtue and forbidding from evil”, are taking place while students all across the country are protesting lack of educational, scientific and laboratory facilities in universities and the low quality of food and dormitory accommodations.

Students’ financial aid and loans is also another issue of concern because most students are struggling to pay for their tuitions and many resort to sale of their kidneys and other unconventional means.