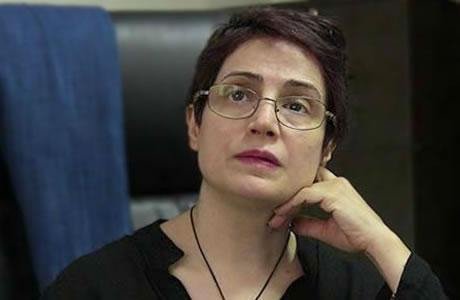 Reza Khandan stated that there are two files for her at the Judiciary and her new charge is participation in “founding and running the outlaw group-let of LEGAM.” LEGAM is a campaign formed by a group of civil activists in Iran to abolish the death penalty.

Human rights lawyer Nasrin Sotoudeh has been told that her founding of and membership in the campaign was illegal.

One of the files contains a five-year prison sentence issued in absentia on October 4, 2016. This file includes diverse charges such as staging a sit-in protest outside the Lawyers League building, opening a Facebook page, giving interviews to different media, having covert meetings with the diplomats of foreign embassies in Tehran, membership in LEGAM, issuing statements in defense of convicts affiliated with the (PMOI) and Al-Qaeda convicts, and participating in the Dervishes’ riots.

There is not much information available on the second file except the two charges of defending women who had protested against the compulsory veil and the complaint filed by Kashan’s Revolutionary Prosecutor. Lawyers, except for the 20 lawyers authorized by the Judiciary Chief, are not allowed to participate in the primary stages of prosecution in political cases.

Human rights lawyer Nasrin Sotoudeh was arrested for the first time on September 4, 2010. Her initial sentence was 11 years in jail followed by 20 years of being forbidden from practicing law and from leaving the country. The Revision Court, however, commuted her sentence to six years in jail and halved the years of prohibition from practicing law and leaving the country.

Human rights lawyer Nasrin Sotoudeh was released from prison on September 18, 2013, after serving two-thirds of her sentence.

In November 2013, she staged a sit-in protest outside the building of the Lawyers’ League in Tehran, protesting three-year ban on her practice of law. With the support of other lawyers, she managed to have her license renewed.