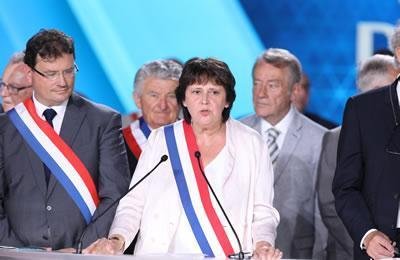 Last year, when I had been just elected and I came to address you, France had undergone major political changes. This year, I join you again while your country is experiencing extreme shake-ups with public uprisings that started in January and still continue all across the country. Their demand is to end the rule of the religious dictatorship as we witnessed just in recent days in Tehran’s great Bazaar and in other major capitals.

During the same period, we reorganized the parliamentary Committee for a Democratic Iran and I am honored to preside it. With my colleagues from different political parties, we have gathered for the idea and the hope of true democracy in Iran, to end cruel death sentences practiced by the regime, and to establish a genuine democracy which observes the separation of religion and state; a real democracy that ensures complete equality of women and men.

We invited Madam President Maryam Rajavi to visit the parliament so that we can hear her analyses and support her activities for a free and democratic Iran.

As a female politician, I am pleased with the serious role of women in the Iranian Resistance and I salute their courage. They confront the suppressive forces. The best words I found to express my support for the Iranian people’s desire for freedom and their effort to have it realized, were from a saying by Gandhi, “True democracy is not the product of some people seizing power, but the product of all enjoying the power to oppose some people.”

Women have been leading the Iran uprising by taking every risk