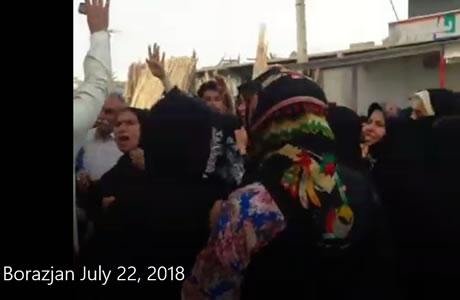 Iranian women actively participated in protests in Tehran and Borazjan

On Sunday, July 22, 2018, a large number of Iranian women actively participated in the protest of the retirees outside the mullahs’ parliament while another group of retired women and men held their protest outside the Planning and Budget Organization in Tehran.

In another part of the capital, the retired workers of the Steel Industry gathered outside the Steel Industry’s Retirement Fund building to demand their non-paid pensions. Retired Steel Industry employees joined the protest in Tehran from Kerman in the south, Mobarake and Isfahan in central Iran, Mashhad and Tabas in the northeast, Semnan and Shahrood in central north of Iran, and Sangrood in northern Iran. Iranian women actively participated in this protest, too.

On the same day, a group of retired personnel of the Education Department, gathered in protest outside the Governor’s Office in Mashhad for their unpaid pensions.

In protest to their employment status, a group of teaching assistants of the Literacy Movement held a protest outside the parliament and burned their mission slips. Both women and men participated in the act and then marched towards the Planning and Budget Organization. Again, Iranian women actively participated in this protest.

Following the water crisis in various cities across the country, residents of the southern districts of Borazjan in Bushehr Province, blocked Borazjan-Ahrom road, on Sunday, July 22, 2018. The crisis has made them desperate. A woman showed her empty bottle and said, “It has been 10 days that we have no water in the Valfajr region.”

Presently, many villages in southern Iran receive their water by tankers. In the past weeks, the residents of Borazjan have repeatedly taken to the streets to protest against lack of potable water.

In March, April, May and June, Iranian women actively participated in at least 238 protests in various cities across the country.