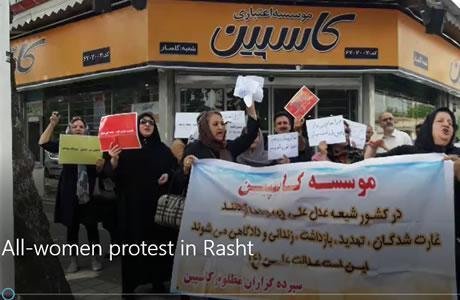 A group of women participated in a protest outside one of the branches of Melal Institute in Khorramabad, capital of Lorestan Province in western Iran, on Tuesday, July 24, 2018, again after several days of protest. The protesters have been defrauded by the Arman-e Vahdat Institute which has stolen their deposits and savings. The protesters forced the Melal Institute to shut down.

The protesters believe that with the new round of sanctions starting in 12 days, the value of Rial will plummet, making their deposits worthless, if they don’t take action now.

In another development also on Tuesday, women participated in an act of protest in front of the Golsar Branch of the Caspian Financial Institute in Rasht, capital of Gilan Province in northern Iran. The protesting women shouted out loud, “Rouhani, Rouhani, stealing is enough, our pockets are empty!”

On the same day, women participated in the protest of the hospital staff of Khomeini hospital, in Karaj, west of Tehran. They held a sit-in protest in front of the Emergency Room for the second consecutive day to protest officials’ failure to pay their salaries.

Also on Tuesday, the plundered investors of Mehr Omid Cooperative held a protest in front of the Governorate of Ilam, capital of Ilam Province, in western Iran.

On Monday, July 22, 2018, women participated in a protest by defrauded investors of Samen-al- Hojaj Institute in Tehran and demanded that their funds be reimbursed.

On the same day in Mashhad, capital of Razavi Khorasan Province in northeastern Iran, the defrauded investors of Caspian Financial Institute planned to hold a protest but were blocked by the city’s State Security Force and Special Units. They threatened the protesters with arrest if they held their protest.

On Sunday, July 22, 2018, the owners of Kowsar lands gathered again after several consecutive days in Hashtgerd, in front of Savojbolagh County’s Governorate, to protest the confiscation of 1,400 pieces of land by the regime. A group of women participated in this protest gathering.

These lands had been granted to Kowsar employees 26 years ago who in turn sold them to other people. Today, after 26 years, the regime claims that the lands are national territories.