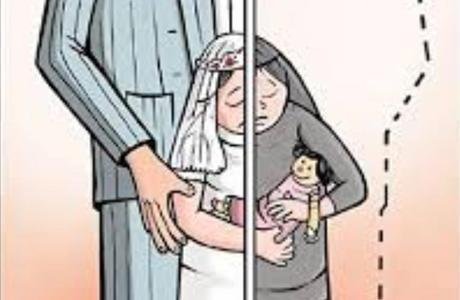 In remarks made on July 24, 2018, Moussavi Chelak, expressed concern over this catastrophe by saying, “The existence of more than 24,000 widows under 18 years of age, warns of a worrying situation.”

Moussavi added, “Some of these child widows could even commit crimes or become victims of social harms to earn their living. Economic and psychological pressures build up on child widows, eventually entangling them in psychological and social crises.”

According to article 1041 of the Civil Code, the minimum age of marriage for girls is 13. And economic poverty is a significant factor contributing to early marriages and the phenomenon of child widows.

From March 2017 to March 2018 (Persian year 1396), the number of marriages registered in Tehran was 78,972, which included 1,481 marriages of girls under 15 years of age. This is just for Tehran. This statistic escalates in lower-income cities and town and destitute regions.

Some 43,000 girls under 15 were married in this time span across Iran, according to the statistics and monitoring director of the Social and Cultural Council of Women and Family. (The state-run salamatnews.com – July 24, 2018)

Earlier in May, Massoumeh Alishahi, a member of the mullahs’ parliament (Majlis), also acknowledged the high number of child widows, and said, “Unfortunately, rural girls have to drop out of school because of a lack of high schools for girls in villages, and their parents force them into marriage after they finish the elementary school. Poverty plays a great role in child marriages. There have been observations where some families give their 9-10-year-old girls into marriage with old men just for a small amount of money to help them with their living expenses.” (The state-run ROKNA news agency – May 28, 2018) This is a practice that leads to rise in the number of child widows.