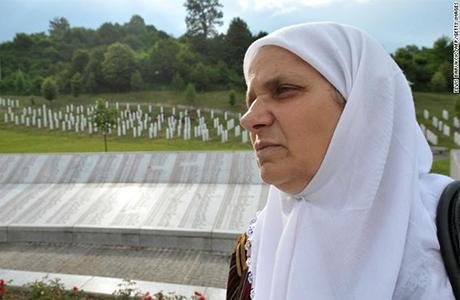 Hatidza Mehmedovic died on July 22, 2018, at a hospital in Sarajevo after a long battle with cancer. Mehmedovic, 65, headed the Mothers of Srebrenica, an organization that endeavored to bring those responsible for Srebrenica to justice.

Hatidza Mehmedovic lost her husband, two sons, and brother in the July 1995 Srebrenica massacre, when Bosnian Serb troops overran the eastern enclave and killed more than 8,000 Bosnian Muslims, most of them men and boys. The Mothers of Srebrenica group has fought for those responsible for the killings to be brought to justice.

The UN War Crimes Tribunal for the former Yugoslavia has sentenced Bosnian Serb wartime leader Radovan Karadzic and his military commander Ratko Mladic over the Srebrenica massacre and other atrocities during the 1992-95 war in Bosnia.

She was a “thorn in the side of people who to this day try to sweep the most serious war crimes under the carpet and rewrite history,” Michael Brand, a Christian Democratic lawmaker in the German Bundestag and human rights spokesman for the parliamentary faction, told Deutsche Welle in an interview.

Brand who had met Hatidza Mehmedovic frequently in the past, described her as a “lioness.” “Justice was her mission, not revenge,” Brand said.

In another piece, Angelina Jolie, special envoy for the UN Refugee Agency, who met Hatidza Mehmedovic in person when she visited the Srebrenica Memorial four years ago, described Hatidza Mehmedovic as “exceptional,” Jolie says of her, “She combined deep strength and resilience with tolerance and humility and a refusal to succumb to hate… For 23 years she was a tireless seeker of truth and justice. She never claimed any special status, but spoke on behalf of all the Mothers of Srebrenica. She did not distinguish between the victims, but regarded them as all equally worthy of dignity and recognition.”

“Her example will live on, in the memories of all who knew her, and in the stories that we should all tell, wherever we live, so that the memory of Srebrenica never fades,” Jolie concluded.

Our deepest tributes on behalf of the NCRI Women’s Committee to Hatidza Mehmedovic and her decades of endeavor for justice for victims of the worst massacre on European soil since the Holocaust. On the eve of the 30th anniversary of the 1988 massacre of 30,000 political prisoners in Iran by the ruling clerical regime, our bonds of solidarity are strongest and deepest.