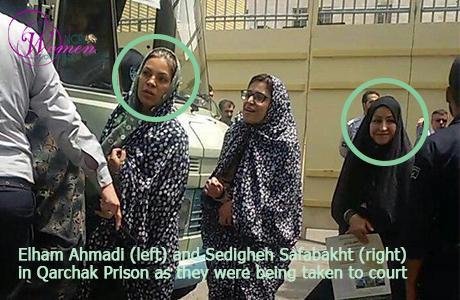 Sufi women, Elham Ahmadi and Sedigheh Safabakht, have been sentenced each to five years in jail by Tehran’s Revolutionary Court. They were arrested during the bloody crackdown on the protest gathering of Gonabadi Dervishes in Tehran on February 20, 2018.

In addition, the court imposed a two-year ban on Elham Ahmadi preventing her from engaging in social activities and from leaving the country. Sedigheh Safabakht was also deprived for two years of activities with or membership in political parties or social groups, as well as activity in the social media.

Ms. Ahmadi and Ms. Safabakht were arrested on February 20, 2018, along with hundreds of other Gonabadi Dervishes. Like others, they were deprived of having access to legal counsel, visits or telephones. Ms. Ahmadi was among the Sufi women who went on hunger strike. The two Sufi women are presently confined in Qarchak Prison, in Varamin.

Eleven Sufi women were transferred to the quarantine ward of Qarchak Prison after being beaten and arrested in the protests of the 7th Golestan Street.

Shokoufeh Yadollahi, another Sufi woman in detention, refused to appear in court on July 16, 2018, in protest to being deprived of having access to a lawyer and the court’s failure to observe the legal process of prosecution in her case.

Another incarcerated Sufi woman, Sepideh Moradi, has been pressured to withdraw the complaint has filed against prison guards, Sepideh’s mother, Sedigheh Khalili, said on July 16, 2018.

The Sufi women were badly brutalized by prison guards on June 13, 2018.

In other related developments, Fattaneh Nabilzadeh, a Baha’i woman residing in Mashhad, was transferred to the city’s Central Prison on July 18, 2018, to serve her one-year sentence. She was arrested at her residence in mid-summer 2013 and later sentenced to serve one year in prison by the Revolutionary Court of Mashhad in winter 2018.

Also on Thursday, July 19, 2018, Siran Aramesh was arrested by security forces in Sanandaj (western Iran) and taken to an unknown location. They confiscated and took away her personal belongings such as computer and mobile phone.