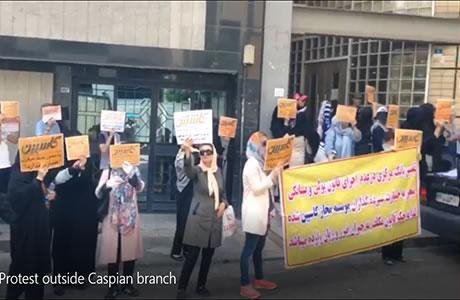 On Wednesday, July 25, 2018, women defrauded by the Padideh Financial Institute participated in a protest gathering outside the building of the Administrative Court of Justice in Tehran. This is not the first time these defrauded women hold a protest against plunder of their wealth by this institute. This time, they shouted, “Plunder is enough, people’s pockets are empty.”

The State Security Force intervened to disperse the gathering. They arrested a number of representatives of the protestors and those who had filed complaints.

In another act of protest on Wednesday, women defrauded by the Caspian Financial Institute marched from the central office of Caspian in Tehran towards Alvand Branch. They chanted, “They have stolen our money, it’s a lie when they say they have returned the money.”

Women defrauded by various financial institutes and companies participated in a number of protests in different cities across Iran in recent days, including in the protests against the Arman-e Vahdat Institute and the Mehr Omid Cooperative Organization in Khorramabad; outside one of the branches of Samen ol-Hojaj Institute in Tehran; outside the Caspian Institute in Mashhad; outside a Caspian Institute’s branch in Rasht, and the owners of Kowsar Lands in Hashtgerd, city whose lands are arrogated.