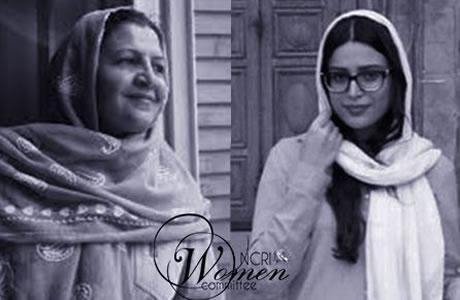 Two Sufi women were finally sent to hospital after five months of being held in detention despite their critical health conditions.

After persistent inquiries and protests to being deprived of medical treatment, Sepideh Moradi Sarvestani and Shokoufeh Yadollahi were sent to hospital on Wednesday, July 25, 2018, for preliminary examinations and were returned to prison afterwards.

The two Sufi women were wounded during the bloody crackdown on the protest gathering of Gonabadi dervishes in Tehran on February 19-20, 2018.

Ms. Yadollahi was hit with a heavy object on the head suffering impairment of her senses of smell, sight and hearing. She has been suffering the pain and side effects caused by such injury for five months while in detention.

Ms. Moradi has been suffering from severe toothache during her five months in jail, but officials in charge of the prison’s dispensary delayed her medical treatment and dispatch to a medical center outside the prison.

Eleven of the Sufi women arrested in the protest gathering of Gonabadi dervishes in Tehran were transferred to the quarantine ward of Qarchak Prison after being brutalized.

The two Sufi women, Shokoufeh Yadollahi and Sepideh Moradi, refused to appear in court on July 14 and 16 to protest their being deprived of having access to a lawyer during their due process of law.

Detention and expulsion of Baha’i women

In another development in Yazd (central Iran), Soror Foroghi Mehdi-Abadi was sentenced to one year of suspended imprisonment by the 3rd branch of the Court of Yazd for being a Baha’i.

In addition, Sarear Moghen, a student of architecture at Isfahan’s Azad University, has been deprived of continuing her studies since June for her faith in Baha’ism. She was expelled in the last term of her undergraduate work despite passing 135 units.

Baha’i citizens are systematically deprived of their human rights while according to article 18 of the Universal Declaration of Human Rights and article 18 of the International Covenant on Civil and Political Rights, “everyone shall have the right to freedom of thought, conscience and religion. This right shall include freedom to have or to adopt a religion or belief of his choice, and freedom, either individually or in community with others and in public or private, to manifest his religion or belief in worship, observance, practice and teaching.”