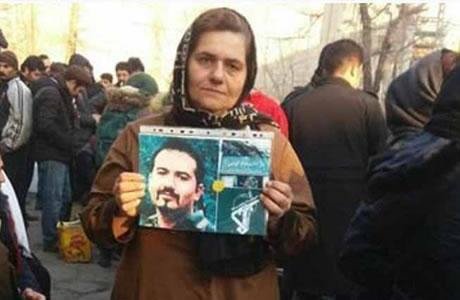 Ms. Farangis Mazloumi, mother of political prisoner Soheil Arabi, announced on Saturday, July 28, 2018, that her son was under tremendous pressure in Greater Tehran Prison, also known as Fashafouyeh. He is constantly being harassed and mistreated by prison guards at the behest of the Judiciary. They intend to force him into take deranging medications so that they could transfer him as a psychopath to Aminabad mental hospital.

Soheil Arabi is presently deprived of talking to anyone in person or on the phone. Ms. Mazloumi has been informed of this by one of her son’s cellmates.

Citing her son’s cellmate, mother of political prisoner Soheil Arabi revealed that prison guards are planning to give him injections or pills that would cause loss of memory or upset his mental balance.

Farangis Mazloumi has sought assistance on a number of other occasions to save her son’s life.

On the Persian New Year’s eve she laid out her traditional Haft-sin setting outside the Greater Tehran Prison and urged all Iranians to do the same to show their support and solidarity with political prisoners.

In other related developments, the students of Tehran’s Azad University staged a protest against lack of water in the country on Monday, July 30, 2018. Female students were actively involved.

Also on Sunday, July 29, 2018, a group of members and clients of Montazeran-e Mahdi Bassij Cooperative staged a protest outside the Governorate building in Orumiyeh, capital of West Azerbaijan Province, in northwestern Iran. Women’s presence was also prominent in this protest.