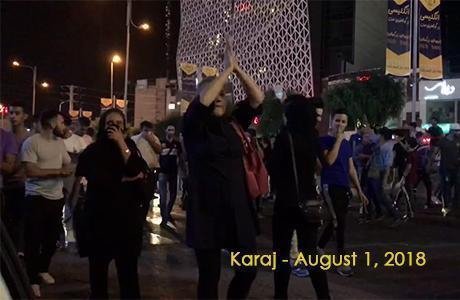 Courageous Iranian women took part in anti-regime protests in Karaj, west of Tehran, on Wednesday, August 1, 2018, for the second consecutive day in step with the fearless youth in this city. They shouted slogans against the regime and clashed with security forces.

Dauntless women were present everywhere in the front row of all protests and confrontations. They called on people to join their ranks.

The protesters chanted, “death to the dictator,” “the mullahs must get lost,” “our money has been spent on the Bassij,” and “inflation and high prices have ruined people’s lives.”

Similar demonstrations were held in other cities including Isfahan, Rasht and Shiraz in protest to the high prices and the soaring price of rial. Courageous Iranian women were participated in all these protests.

Also in Rasht, in northern Iran, a large group of people gathered at Michael Intersection and protested the chaotic situation of the economy, high prices and poverty. The repressive state security forces raided the protest gathering and beat the participants with batons and electric shockers, outraging the passers-by and others who were present at the scene. One of the courageous Iranian women yelled at the State Security forces and said, “They killed our youths; they trampled our rights. If you cared, you would have assisted your own people and helped protect their lives.”

On Tuesday, July 31, 2018, the people of Mashhad gathered in Sajjad Blvd. and staged a protest.

Also, in continuation of the protests of swindled investors in different cities, a large group of investors plundered by the fraudulent financial institutes of Caspian, Arman-e Vahdat, and Arman-e Alborz Iranian gathered in protest outside the Central Bank of Iran in Tehran. Eyewitnesses said the gathering was one of the most unprecedented among the protests by plundered protesters, so far. Courageous Iranian women played an active role in this protest.

In Rasht, capital of the northern Gilan Province, courageous Iranian women staged a protest against Caspian Institute which has plundered their money. They shouted slogans against the ousted president of the Central Bank of Iran and accused him of treachery.

Teachers from all across Khuzestan Province, gathered outside the Department of Education in Ahvaz on Tuesday, July 31, 2018, and burnt their pay slips in protest to injustices done to them and their low wages. They burned their pay slips. Courageous Iranian women actively took part in the protest gathering of teachers.