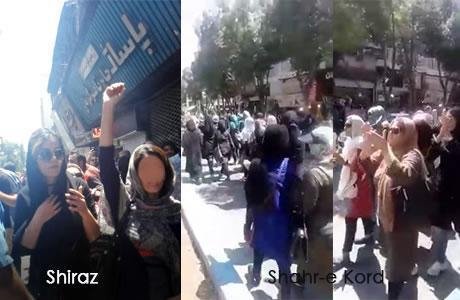 Iran’s brave women widely participated in the third day of protests and demonstrations in various cities across the country.

On Thursday, August 2, 2018, Iran’s brave women took part in the protests in Shahin Shahr of Isfahan, Shiraz, Mashhad, and Arak.

Iran’s brave women were in the frontline of the protests in Shahin Shahr against high prices, lack of water and unemployment. Shahin Shahr is one of the major cities of Isfahan Province in central Iran.

On the same day in Shiraz, capital of the southern Province of Fars, people took to the streets against the Iranian regime’s destructive policies. Iran’s brave women had an active and inspiring role in these protests.

Also in Arak (in central Iran) and Mashhad (northeastern Iran), people took to the streets for the third consecutive day and extensive protests were held with the participation of Iran’s brave women. In Mashhad, protesters chanted, “residents of palaces, shame on you, let go of the country.”

Fearing spread of protests, the State Security Force of Mashhad opened fire on the demonstrators and arrested a number of youths.

On Wednesday, August 1, 2018, farmers of Marghmalek and their families held a protest outside the Governorate of Shahr-e Kord, the capital of Charmahal and Bakhtiari Province. Women played an active role in this protest. They loudly expressed their objection to the lack of drinking water. One of the women said they have not been able to bathe for weeks and they do not have water even for washing their hands.

The Governor of Shahr-e Kord ordered closure of the building and called off all work to evade answering to people.

On the same day (Wednesday, August 1), a number of women were arrested in Molla Sadra Avenue of Shiraz. A young woman posted a picture of herself, holding up a placard in protest to the arrest of her mother who was a retired teacher. She said, her mother was only demanding her right.

Iran’s brave women have participated in at least 320 protests in the period from March until the end of July.