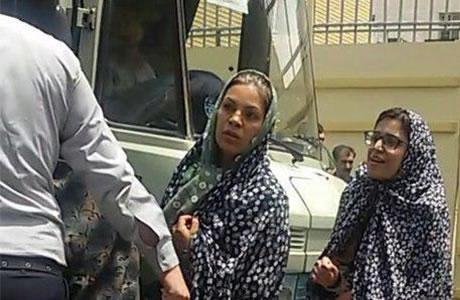 Sufi women imprisoned in Varamin’s Qarchak Prison (a.k.a. as Shahr-e Ray) were beaten up again by security agents on the grounds that one of them made a telephone call to her young daughter.

Security agents disconnected the call made by Elham Ahmadi and provoked her protest later joined by other Sufi women. The Sufi women were subsequently attacked and beaten up by the prison’s security force.

Another reason for the raid on the incarcerated Sufi women was the public dissemination of an audio recording which revealed the catastrophic state of medical treatment in Qarchak Prison. The recording was allegedly done by Elham Ahmadi.

The Sufi women were subsequently deprived of their rights to visitations and telephone calls.

Hundreds of Sufi men imprisoned in the Greater Tehran Penitentiary held a sit-in protest against the guards’ raid, demanding the immediate release of Sufi women detained in Qarchak. The protest compelled Qarchak Prison officials to backtrack and allow the Sufi women to have one visit every four months and to make telephone calls only under the supervision of guards in the Administration Office. In return for this concession, the Warden of Qarchak Prison visited the Sufi women, instructing them to urge the Sufi men to end their sit-in in the Greater Tehran’s Penitentiary.

In another development on July 28, Sufi women Shokoufeh Yadollahi and Sepideh Moradi refused to appear in court for the third time in protest to being deprived of access to lawyers in breach of the due process of law.

Shokoufeh Yadollahi was transferred to hospital for the second time on July 29, 2018.

Ms. Yadollahi suffered skull fracture due to blows dealt to her head at the time of arrest and has completely lost her sense of smell. Prison officials had blocked her treatment for five months which led to impaired vision and lengthy bad headaches.