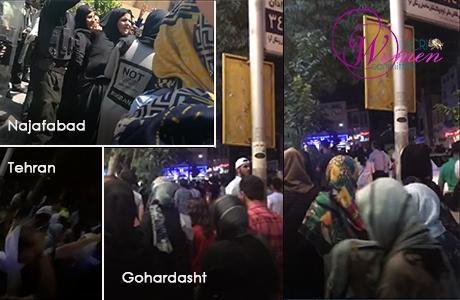 In the evening of Friday, August 3, 2018, Iranian women and girls accompanied Tehran’s courageous youth to start the protests in downtown Tehran with chants of “death to the dictator,” despite massive presence of the State Security Force, plainclothes agents and the anti-riot guards. They shouted and urged the public to cry out and demand their rights.

In Gohardasht and Karaj, freedom-loving women and youths demonstrated until late at night, chanting, “death to Khamenei,” “shame on the scoundrel leader (Khamenei),” “our money is under the mullahs’ cloak,” “the mullahs must get lost,” etc. They clashed with the security forces. Women’s presence was particularly prominent in Gohardasht.

In demonstrations on Thursday, August 2, 2018, which also continued into the night, Iranian women and girls in Najafabad chanted slogans against the regime’s policy of spending the Iranian people’s wealth in Syria while the younger generation in Iran is abandoned without a future.

In Shahin Shahr, a large group of women marched in the city, chanting against high prices, inflation and lack of water, and inviting locals to join the protests.

In metropolises like Shiraz and Mashhad, Iranian women and girls actively participated in the protests alongside men.

Iran’s women and girls have participated in at least 320 protests from March until the end of July 2018.