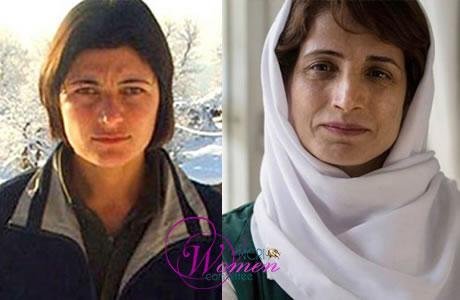 Women political prisoners have been subjected to additional pressure in Iranian prisons. Political prisoner Zeinab Jalalian had to go on hunger strike, and the detention of human rights lawyer Nasrin Sotoudeh in Evin prison was renewed for another month. A young woman arrested during the uprising in January was sentenced to 74 lashes and one year in prison.

In a letter addressed to Khoy Prison authorities, Zeinab Jalalian informed them of the hunger strike of 10 prisoners in the women’s ward in protest to being deprived of their basic needs and weekly visitations. She said they would continue their hunger strike until the new restrictions are lifted.

The hunger strike protest is in reaction to the confiscation of a cell phone discovered and confiscated during inspection of their cell a few days earlier. Prison’s security has opened a new file for Zeinab Jalalian and nine of her cell mates who have been interrogated several times.

On Sunday, July 29, 2018, the prisoners were summoned again and warned that if they did not introduce the owner of the phone, all of them would be deprived of their basic rights such as shopping form the prison’s store, using the library, weekly visits, etc.

Zeinab Jalalian is one of the most resistant women political prisoners who has been under tremendous pressure since her detention, including being deprived of medical treatment.

In another development regarding women political prisoners, the detention of human rights lawyer Nasrin Sotoudeh was extended for another month after a 10-day delay. The news was announced by Nasrin Sotoudeh’s husband, Reza Khandan. (The state-run ISNA news agency- July 30, 2018)

Also, a young prisoner by the name of Neda Yousefi was sentenced to one-year imprisonment and 74 lashes. Ms. Yousefi was arrested in Shazand in the course of the nationwide uprising in December/January. Her verdict was issued by Branch 102 of the Second Penal Court of Arak.