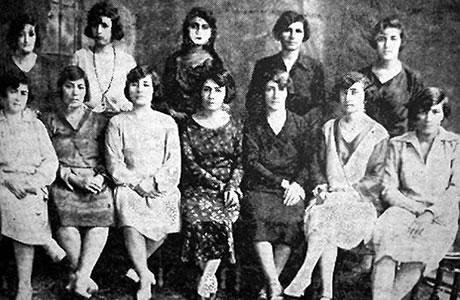 August 5th marks the anniversary of the 1906 Constitutional Revolution in Iran which aimed to establish democracy, the rule of law, and a parliament of people’s elected representatives and push Iran towards progress and advancement.

Before the Constitutional Revolution, women in Iran were not entitled to any rights and were completely excluded from social activities, restricted to household chores.

The Qajar King, Naser al-Din Shah, did not allow his numerous wives to take part in society, even though he had traveled to Europe three times and had become familiar with women’s freedoms and their social engagements. Once a year, the Tehran bazaar used to be closed to the public on his order, and that was the only day his wives were allowed to shop in the market with all the shops run by female salespersons. No men were allowed in. He also ordered a shrine to be constructed at the Shah’s palace so that the women of the court could practice their religious vows inside the palace; no woman had the right to leave the king’s haram for visiting and prayers at a Shrine because it would expose them to men.

The Constitutional Revolution changed that, and women gradually engaged in social activities. The Revolution had an amazing impact on the society. The obstacles to women’s progress were gradually removed or minimized. According to Morgan Shuster in his book The Strangling of Persia (New York: The Century Company, 1912), “Women in Iran have been the most progressive (if not the most radical) women of the world since 1907.” Shuster continues, “the veiled women of Iran, with a little prior experience, instantly became teachers, journalists, founder of women’s clubs, and spokesman in political affairs,” the same rights and social status for which “the women’s movement in the West had spend tens or perhaps hundreds of years to achieve.”

Pioneers of the fight for women’s rights

After the Constitutional Revolution, activists of the women’s rights movement, many of whom were from the upper classes, were gradually organized in associations, and established new girls’ schools, adult education classes, clinics, and other types of women’s institutions.

Progressive men of the time, including the intellectuals, journalists, poets and parliamentarians (such as Vakil-or Ro’aya and Taghizadeh), were powerful supporters of women’s rights. Dehkhoda’s satirical articles in Soor-e Esrafil, Iraj Mirza’s poetry, the writings of other writers in Habl ol-Matin, Iran-e No, and Mosavat newspapers all showed solidarity and support of newspaper writers and staff with the women’s movement.

The intellectuals of that time insisted on the establishment of schools for girls. They argued that when mothers are illiterate and unaware of the needs of their time, they cannot be expected to be good role models for their daughters. They argued that education helps girls learn the new sciences and traditions of the advanced world.

In April 1910, fifty girls’ schools were established in Tehran.

In 1913, a women’s magazine, Shokoufeh, published a list of 63 girls’ schools in Tehran with about 2,500 students. According to Shokoufeh, girls made up one-seventh of the students in Tehran.

The leading women who founded the girls’ schools in Tehran, included Bibi Khanum Astarabadi. Astarabadi was a pioneering educator who founded the Dooshizegan Primary School. The school had five teachers and students were from seven to twelve years old.

Astarabadi also created a nursery home for the disadvantaged and orphaned girls. Astarabadi was an author and wrote a book entitled, “Maayeb al-Rejeal” (literally, The Men’s Flaws).

Another founder was Safiah Yazdi, one of the famous women of the time who established the Effatieh school in Tehran in 1910. Yazdi won fame for her bold speeches in defense of women’s rights.

Establishment of the girls’ schools faced opposition from fanatic, reactionary mullahs who incited the unaware masses of the public who insulted the female students, teachers and staff, and at times physically harassed and beat them.

The Association for the Liberation of Women was one of the first women’s groups formed on December 30, 1906, after the constitution was approved. The Association’s meetings were held twice a week, and a number of famous women and men also attended their meetings.

Other famous women, including Sedigheh Dolatabadi and Shams ol-Muluk Javaher-kalam, were also members of this association.

Another participant in the Association’s meetings was Mrs. Park Jordan. Mrs. Park and her husband, Martin Jordan, had co-founded the Alborz College for boys in Tehran in 1894 and ran the college until 1940.

The meetings of the association were held secretly. Once, a group of fanatics who had learned of the news of these meetings, mobilized a mob to raid and disrupt the meeting. But before they arrived, a young Armenian informed the participants of the news and they fled in time.

Another women’s association was the Patriotic Mokhaddarat Association, founded by 60 women in 1910 in Tehran. They mainly worked to establish girls’ schools, adult literacy classes, and orphanages. They built a school and orphanage in Tehran for 100 female children. One of the members of the Patriotic Mokhaddarat Association was Agha-Baigom, wife of the prominent orator of the Constitutional Revolution, Malik ol-Mutekalemin, and daughter of the free thinker clergy, Hadi Najmabadi. Sheikh Hadi had also founded a girls’ school in South Tehran.

Other individuals involved in the Patriotic Mokhaddarat Association included Anahid Davidiyan, wife of Yefrem Khan, a prominent Armenian leader and Tehran’s Police Chief after the conquest of Tehran and the overthrow of the last Qajar King, Mohammad Ali Shah’s regime. Mrs. Davidiyan was a powerful speaker.

Sadigheh Dolatabadi traveled to France in 1922 and studied at the prestigious Sorbonne, wrote articles in European newspapers and delivered lectures on women and politics. She spoke at the International Women’s Conference in 1926 as the representative of Iran.

Mohtaram Eskandari (b. 1895, d. 1924), was from the Qajar family, whose father was one of the founders of the Adamiyat Association. She was a pioneer of the women’s movement, despite her short life. She founded the “Patriot Women’s Society.” The society published a magazine called Women Patriots.

Dorrat ol-Ma’ali, whose father was a personal physician of Naser al-Din Shah, was a leading teacher and a member of the Patriotic Mokhaddarat Association. She established Tehran’s Mokhaddarat School by using her personal wealth, and asked the educated female in her family to help her in teaching the students.

Dorrat ol-Ma’ali and Sedigheh Dolatabadi were among of the strongest opponents of the colonial treaty between Russia and Britain to divide Iran into Russian and British zones of influence in the north and south, respectively. Dorrat ol-Ma’ali who was in touch with members of Majlis (parliament), asked them to take a stand against the deal.

Dorrat ol-Ma’ali’s home was a center for women’s meetings and conferences where poetry and cultural sessions were held and well-known poets such as Iraj Mirza and Malek os-Shoara Bahar actively participated.

After the bombing of the parliament in July 1924 and the beginning of the uprising in Tabriz against the tyranny of Mohammad Ali Shah, women wearing men’s clothing actively participated in the 11-month resistance and uprisings led by Sattar Khan and his comrades. Women took part in the fights in the Amirkhiz neighborhoods and streets, and some died confronting the enemy.

Behzad Taherzadeh, a member of the resistance movement of Tabriz, was cited as saying that one of the wounded soldiers refused to remove her clothes for treatment. When Sattar Khan asked him the reason, he told him that she is a woman and does not feel comfortable.

Habl ol-Matin, one of the well-known newspapers of that era, once reported, “In one of Tabriz’s battles, twenty women were identified among the dead who wore men’s clothing.”

Bibi Maryam Bakhtiari, (b. 1847, d. 1937) was a revolutionary and active member of the Iranian Constitutional Revolution in 1909. Her father was Hossein Gholi Khan and his brother was Sardar (Commander) As’ad Bakhtiari. Bibi Maryam was a strong supporter of her brother Sardar As’ad in capturing Tehran and the triumph of the Constitutional Revolution on July 25, 1909. Bibi Maryam was an educated and enlightened Iranian woman, a pioneer in demanding equal rights for women, and one of the very early activists for freedom. She was also a campaigner for the Iranian national interests against the occupation forces from Russia and Britain during WWI. Bibi Maryam learned military warfare and shooting skills at a young age (like other Lor tribal and nomadic forces) and became a military commander. Bibi Maryam was opposed to the despotism of Mohammad Ali Shah, and in various letters, telegrams and lectures, she educated and advised the leaders of the Bakhtiari tribes to fight the Qajar tyrants.

On November 29, 1911, the Russian government won the agreement of the British and gave a warning to the Iranian parliament to expel Morgan Shuster from Iran within 48 hours.

William Morgan Shuster was an American lawyer, civil servant, and publisher, who was serving as the treasurer-general of Iran by appointment of the Iranian parliament, or Majlis. Morgan Shuster was there to help manage Iran’s financial system, but he also opposed the colonial rule of Britain and Russia in Iran and was active in supporting the Constitutional Revolution.

To protest the ultimatum in Tehran, 50,000 people rallied in the streets and announced a general strike. Thousands of women wore white shrouds, showing their readiness to sacrifice their lives for their country. On December 10, 1911, the Patriotic Mokhaddarat Association called for a massive demonstration outside the Majlis. Thousands of women participated in the rally.

In his book The Strangling of Persia, Morgan Shuster wrote, “Free from traditional confines and surrounded shrines, three hundred rebel women pour on to the streets. They had black hijab and white scarves. They held pistols under their skirts and hijabs. They went directly to the parliament and gathered there and called on the Speaker of the Majlis to accept all of them. Some of the women were allowed inside the parliament. These mothers, wives and girls displayed their pistols to show they were determined in their beliefs. They removed their hijab and threatened that if the MPs failed to demonstrate their duty to protect the freedom and pride of the nation and the country, they would kill these husbands and sons with the same pistols.”

On the anniversary of the Constitutional Revolution, we commemorate the brave women of Iran who played an active role in the Constitutional Revolution and thereafter; courageous women who were the vanguards and pioneers of the equality movement and took risks to hoist the banner of women’s liberation in the darkest eras of the patriotic rule. Their struggles became the beacon for Iranian women in the modern time who have fought against both regimes of the Shah and the mullahs. With such role models, the PMOI women are now leading the Iranian Resistance movement to topple the mullahs’ misogynist regime and to the final victory.